Believe it or not, the current version on RBMK was never supposed to be a competitive robot, it was entirely built to see if my weird gyro walker idea would actually work. I was delighted with it performance at Ant Freeze even though it didn't win a fight, so I was more surprised than anyone when it reached the finals at AWS 57 (and won the best design award!).
It's success means it's definitely here to stay, so I've decided to get started on some significant upgrades. First up are the weapons... 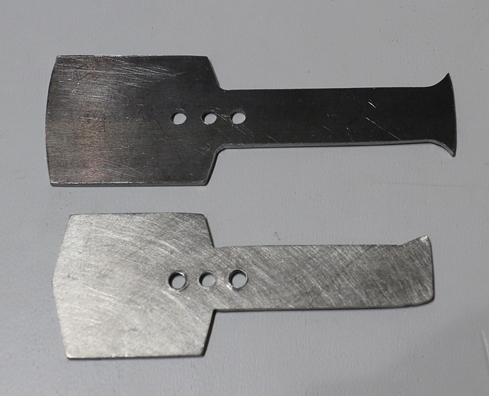 I've moved from 90mm 12.5g Titanium blades to 100mm 20g CS95 Steel ones, this will double the power of the main spinners

and the hardened steel blades should hold up for longer without going blunt. The chassis is being remade of high strength 6082 aluminium rather than crappy 1050 (I didn't want to waste the good stuff on such a stupid design

I for one can't wait to see the upgrades. RBMK is absolutely one of my favourite bots. How much would increasing the power of the blades affect its mobility? One thing that particularly impressed me about it was how quick it was.
Top

The bigger/heavier blades will increase the turning and gyro forces which could make it difficult to control - but I'll dial back the acceleration/braking and maybe adjust the angle of the main blades so it should move much the same as before.
I'm also going to add some kind of adjustment for the movement to tune it to the grip of the arena, I really struggled for control in the BBB arena due to the low traction.
Team Zero - AWS 58 Champion!
Zero - rambot - - Axiom - axebot - - Valkyrie - drum spinner
Blueprint - rambot - - Vampire - horizontal spinner - - Particle - ???
RBMK - quad spinner gyro walker - - Duality - dual spinner gyro walker
Top

Really need a video of this guy in operation

https://youtu.be/2Q1-1wDGhec
I've added a comment on this video that's got timestamps for RBMK's fights (and my others)

How have you made that linkage to connect the axe to the two N20 shafts?

Is it some kind of shaft coupler, flange plate thingy? Did you machine it yourself? It looks good anyway.
Robots: Betsie - RaspberryPi controlled flipper bot with gyro stablisation - too clever for her own good?
Stacie - tidy flipper; 4wd driven by hair bands
Top

I drilled out the 4 threaded holes in one of the hubs, and countersunk those holes. I then ran bolts through the drilled out hub, through the axe arm, and screwed them into the second hub. The hubs then attach to the n20 shafts in the usual manner.
Team Zero - AWS 58 Champion!
Zero - rambot - - Axiom - axebot - - Valkyrie - drum spinner
Blueprint - rambot - - Vampire - horizontal spinner - - Particle - ???
RBMK - quad spinner gyro walker - - Duality - dual spinner gyro walker
Top

Well, AWS 58 proved very successful for Team Zero, and much to my surprise I’m now an AWS winner!

Six months ago RBMK was no more than a mad idea in my head that I was less than 50% sure would even work at all, and now it’s the champion of an event that is normally dominated by wedges, flippers, and the occasional vertical spinner. Honestly I still can’t quite believe it.

It had a great run, dishing out plenty of damage along the way (hey Dominus), but it wasn’t all smooth sailing. During it’s group fight against Error.3xe it sustained damage to one of its main spinner motors, which meant that for the rest of the event it struggled to move normally, and in the first fight of the final Trigger broke both the small vertical spinners. By the last fight it was barely working at all. I don’t really remember the final but I think it was fairly even, with both bots taking damage, but in the end RBMK kept going and managed to hang in there just long enough to take the title. Hooray!

Valkyrie and Zero also had a good tournament, Zero picked up a standard 3 wins, including one that must have been over in 2 seconds flat. Valkyrie has a great event, winning it’s group, and going undefeated (not including a nominated loss against RBMK) until being eliminated by Trigger in the third place fight.

A great event by Chris again, with lots of excellent bots, my particular favourite was Dave Weston’s new drum spinner Baphomet, I’m just glad I didn’t have to face it.

Already looking forward to attempting to defend the title in Sheffield! 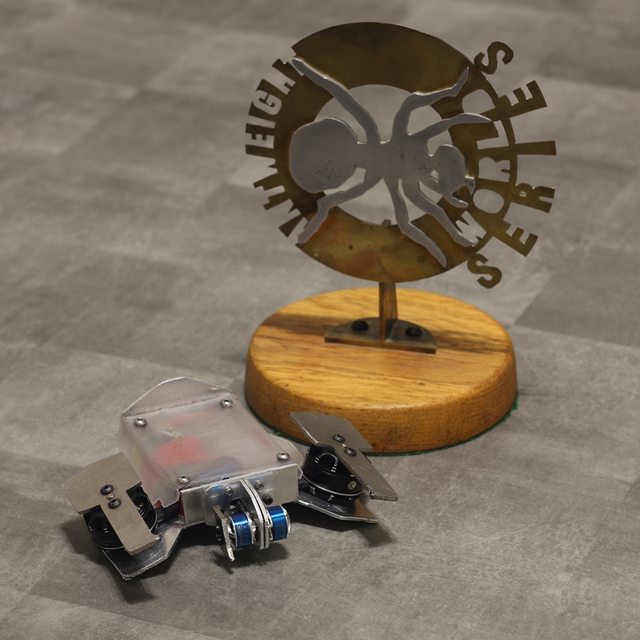 That is a brilliant robot and probably the most original but not quite the first walker to win an AWS.
Mutant won in 2004 at AWS15 but there were far less robots to beat back then
http://www.antweight.co.uk/results/ws15/ws15.htm
Top
Post Reply
128 posts