Ahhh sorry I misread it...I still think d-hole wheels/parts are expensive and Chinese sellers need to fill that gap in the market. Too many ideas. I think you should build them all!!!
Top

I'm sure they'll start selling more wheel varieties now that more schools are teaching it to kids. Lots of demand!

I realised on my lunchtime wander that using an indirect drive means I don't have to use the D-axled wheels - I can use Lego wheels! Admittedly not very grippy, but I've already got a ton of them. hmmmmmm...

In rust we trust, and all that. Is gaffer tape allowed, or is it considered entanglement?

Anyway, I made an attempt at mocking up Sprouting Potato's wedge last night. It's supposed to be the more basic of the robots, and I've even ditched the adjustable wedge, but naturally I've given myself issues such as where to put the srimech arm, and how to mount the motors (they're halfway inside the wheels). 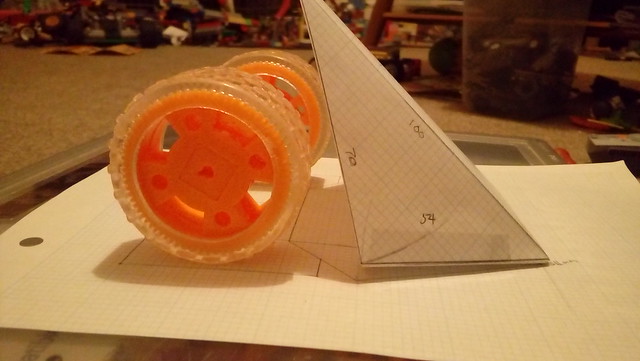 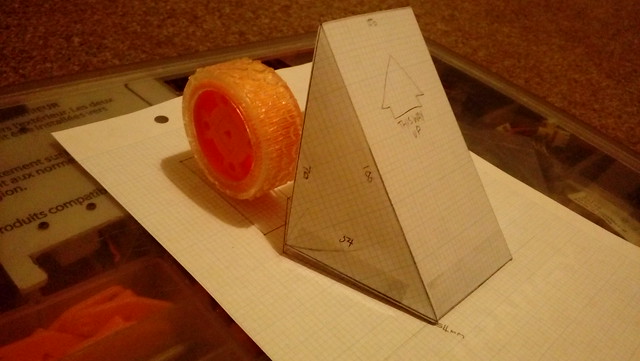 Maybe I need to hold off on using those 47x20mm buggy wheels for a bit, but they're so grippy! And orange!

Wheels can never be too orange.

Worth grinding down the inside of the wheel so the motor sits more inboard into the wheel?

Never can have too much orange

the wheels come in two sections, with a tyre around them. i already cut out the inside of one half, so the motor is 10mm inside.

what I'm worried about is how to attach the motor to the chassis, although i don't think it'll pose a big problem.

i think I'll work out the other bot tonight. this one's a lifter with rotating paddle things called Suspicious Houmous.

is there a name for the sound of a needle scratching off of a record? if there is, pretend i just wrote that - I've had an idea!

the watermelon! why does it have to have a weapon? why am i making a wedge when i can make a melon?

I'm making the melon. I've already designed it, so i just need to build it. yay! I'm getting somewhere!!

Over the last few days, I've been trying to work out how to do the armour of the melonbot. Having a big, long curve made it rather tricky.

First plan was to have the sides of the slice as part of the top and bottom, kinda like someone joining their fingers together to make slats. It made a good shape (in paper), but I wasn't sure how to attach them together without putting bolts on the top and bottom, which would interfere with the ground clearance, plus there were gaps between the slats which I didn't like much. Access is also a little tricky.

Second plan was the basic one.. I cut out the old taco shape, and a separate piece for the back and sides. I'd avoided it before because it seemed like a less strong idea initially, but at least it wouldn't have the problem of gaps, plus it relied on bulkheads, which would make it even stronger, and didn't have to be made so angular.

I cut it all out of 0.5mm polycarb to test, and hit the first proper snag of the plan: even at 0.5mm, that stuff does not want to do sharp bends! I'm pretty sure the cheap 1mm aluminium bent easier. Also; who's pinched my g-clamps?

So, whilst I can make the general shape easily enough, fitting it all together needs a bit more thought. Plus there are other considerations, like where to put bolts, and is making an invertible wedge a good idea when the wheels are going to get in the way?

All part of the learning curve!

finally starting to get somewhere, but it's been quite the learning experience! turns out I'm not a natural at this sort of thing.

here's how Suspicious Houmous looks at the moment.. 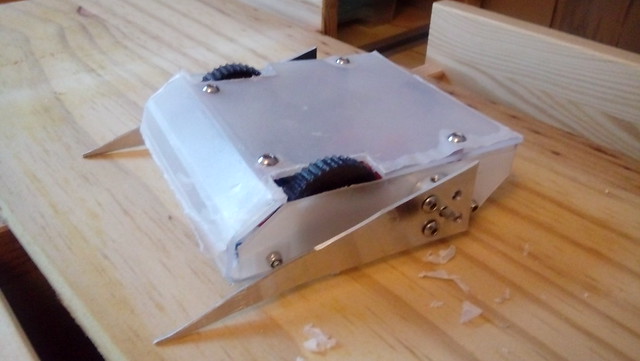 it's supposed to be a lifter with fully rotational lifting blades. there's meant to be a strut between the ends, to make it less hit and miss, and rounded at the other end.

things i have learned: my main problem is drilling accuracy. it doesn't seem to matter if i make guides or drill slow or fast.. it always seems to go wrong. think i need to get some kind of pillar drill.

so, this might turn out to be the prototype. i reckon i can build it better second time around, and if not, then it's a good job i was going for a sort of rat look robot!
Team BLEEP Suspicious Houmous / Sprouting Potato / Fermented Melon / Black Carrot
Top
Post Reply
124 posts