thanks for the advice!

i had heard of the pink servo, but as i expect my first bot to be sent flying into the corner, burning, with wires and cracked polycarb strewn everywhere by a malfunctioning weaponless walker, then i should probably stick to a cheap servo initially.

i have also read that tilt switches are unreliable and can cause more problems than they fix, but figured it might be worth a go. you're probably right, tho. time to stop worrying and get on with it!

Forgive me, forummers, it has been flippin ages since my last confession..

I'd like to say that I've built an amazing bot that's sure to win in every fight, but I can't say that because I haven't even made armour, or a card mockup, or a definitive drawing..

My lack of progress is mainly down to indecision - I have lots of ideas and can't nail down which one to use. I thought I'd solve the problem by buying another DasMikro and making two bots, but the second DasMikro burned out and returned me to where I started. I thought I'd fix that issue by buying the cheapo speed controllers that Paulmchurd used in his school bots, but then wondered what I'd do if that didn't work out (I wasn't sure if they were braked or not), so I splashed out on a NanoTwo V3. Then I thought I'd better buy a pink servo to go with it. Now I've got enough bits for three bots!

Aaaanyway, the NanoTwo and the Bustophedons both turned up today, so guess which one I tried out? The cheapo 'Bustophedon', of course! 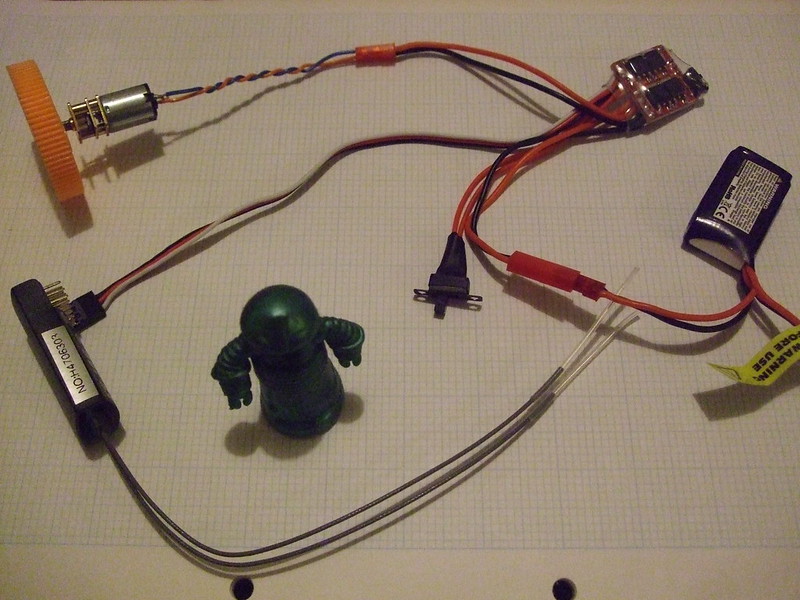 It helps that it required no soldering.

As usual, I expected the worst, but it actually seems to do the job. Forward goes forward, back goes back, and the little switch on the PCB switches the 'release to reverse' thingy on or off. Releasing the stick makes the motor coast, which I believe means it has no braking? It's nice that it's all ready to go, although I'll have to do some chopping and splicing of the power lines when using two of them. Too many switches, too few batteries.

As for the bots.. I know one will be a sort-of lifterish thing, and then probably a grabber of some kind. Not sure about the third. Definitely not a spinner, mainly because I just hate the noise the motors make!
Team BLEEP Suspicious Houmous / Sprouting Potato / Fermented Melon / Black Carrot
Top

Another update - I hope you're prepared for many fails.

I soldered the two Bustophedons together to share power lines and whatnot. I hoped that getting rid of some of the wires would reduce the weight a bit. It barely changed! Together, they weigh about 20g, which is kinda heavy. Might do the job if I make a pushbot or something.

I then tried the NanoTwo. er.. it seems my research has been as rubbish as usual. I could've sworn I'd seen advice saying that a FlySky i6 would work with a DSM receiver, and there was even advice saying to not buy a certain version because that won't work. Well, it doesn't ruddy work, and I can't find the advice that I'd previously found. Was it a dream I had? Maybe. New tx required, it was between an OrangeRX T6 and a Devo 7E. The Devo seemed more flexible, and was £10 cheaper, but the T6 is transparent orange!!! In the end, I went for the Devo, but deep down I think I still want a T6, just for the colour.

This also means I'll have a TX that my son can use, altho he's so obsessed with spinnahs that I'm not sure he'd be happy with the safety-conscious bot that I'm likely to give him.

My first robot plan was to build a lifter, but the plan called for a 180 degree servo. My MG90S only goes 90 degrees, but I found a youtube video about converting it to 180 that seemed simple enough. Just add two 2k2 resistors! easy!

So, I did the deed and plugged it into the servo tester. Powered it up and the servo went into overdrive and jammed. Nadgers! A bit of wiggling by hand freed it up, but it had broken a plastic washer thing inside the gear mechanism. Maybe a limiter that stops it going beyond 180 degrees? I powered it up again, with the resistors shorted out to return it to 90 degree rotation, but the motor just went round in one direction, ignoring the input signal. New servos ordered. Good job they're cheap! ooh, and my soldering's improving!

So, no NanoTwo until the TX arrives, I'm reserving the pink servo for the NanoTwo, and I killed my only other servo. Ignoring the 10:1 motors for now, it looks like my first bot will be a fairly basic pusher. I'm going to try and make it a bit unusual, if I can.

voorsk wrote: ↑
Tue Apr 03, 2018 10:22 am
I then tried the NanoTwo. er.. it seems my research has been as rubbish as usual. I could've sworn I'd seen advice saying that a FlySky i6 would work with a DSM receiver, and there was even advice saying to not buy a certain version because that won't work. Well, it doesn't ruddy work, and I can't find the advice that I'd previously found. Was it a dream I had? Maybe. New tx required, it was between an OrangeRX T6 and a Devo 7E. The Devo seemed more flexible, and was £10 cheaper, but the T6 is transparent orange!!! In the end, I went for the Devo, but deep down I think I still want a T6, just for the colour.

I have a sneaking suspicion you confused the FlySky i6 for a Spektrum DX6i, the latter is one of the recommended (but DSMX only) transmitters.

Many servos have an internal physical limit to their travel and making it go beyond this means they can hit and break this limit. I know the MG90/SG90 has a physical limit in them to jam it if it goes too far.
Nuts And Bots - For all your components and ready built antweights!

I think I got confused between AFHDS and DSM while searching for 6i alternatives. I've found some threads suggesting the i6 over the i6s due to the i6s only being able to handle AFHDS A2. Acronym overload, I guess.

I did know about the physical limit of the MG90S, but it was limiting to 180 degrees, and the servo never got anywhere near it at 90 degrees. I figured the mod would just take it to the limit. My own fault for being lazy. I knew I should've looked up what the resistors actually do, but if you can't trust a youtube video, what can you trust?

So, who else has lots of ideas, but none of them turn out to be practical?

My most recent idea was one I've had a few times but kept forgetting about: a watermelon slice!

It seemed like a good idea.. wedge shaped and kinda funky, nice angle for flipping.. Why had no-one done it before (at least in the last few battles I watched)??

So, last night I cut out a circle of cardboard, folded it, and tested its size in a 4" box. The best fit seemed to be a 140mm diameter semi-circle, with a 42 degree angle. After some experimenting and trying different ways of placing my papercraft components, it became clear that the reason no-one else has made one is space; there's not a lot of it!

Due to the curves, only 80mm of the width was usable in the middle (which isn't so bad), but there was hardly any room for anything else in the short length and constricted height. The RX and ESC can fit in front of the motors, but it's a right fight for space with the battery and the servo. The only way I could fit them was with the battery on top of the servo, which didn't do much for horn mobility.

I might see if I can alter the shape a little. Watermelons aren't perfectly spherical. so maybe I can make it a bit more oblong for some extra space.

hmm.. I've failed on images again. Hate that. Here, have some of my research:

ooh - I spoke too soon! moving the wheels a bit further out has freed up enough room for everything! using a different servo has also helped a lot, as the tabs are less intrusive. 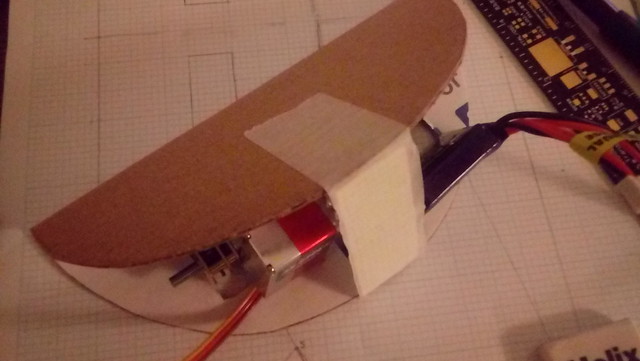 now i just need to work out how to make the back, so it looks less like a taco.

I've put the melon on hold, as it's a bit too confined, and I'm not convinced that I can build a good robot out of it. I'll probably come back to it when I've got a bit more experience. I can think of a few solutions to the space issue, but they all require parts that I don't have, and only seem to be available from Chinese sellers. Is it really so hard to buy a D-shaped 3mm rod/axle?

I'm convinced I'm just not using the right search terms, or haven't found the amazing model shop that stocks everything.

So, the next plan is a lifter, and while I have a few ideas for quite basic lifters that I should probably be attempting first, I of course decided to watch too much Battlebots and attempt an overcomplicated hybrid of Biteforce and Razorback. I like razorbacks 360 degree weapon, and i like biteforces grabber. Must be a piece of cake to replicate a bit of both in an antweight! heh. In the end, I settled on a 270 degree flappy bit with 4wd powered by two motors. I'm debating the addition of a grabby bit, but it's a bit academic as I'm missing a few bits to make the drive system work. I'm not sure if the parts will arrive before AWS 55.

So.. must try and keep it simple! Direct drive wheels.. Weapons with only a few basic linkages..

ooh, and I managed to create a team! I suppose a man and a robot is a team - I've watched Total Recall 2070 and Almost Human, and they were definitely teams. Is brobot a term? Anyway, I went for Antescher Assault Systems, as a homage to Ant Attack (best game evah) and Planetary Assault Systems (not bad music with a cool name that I always wanted to pinch given half a chance)

Maybe the next update will involve an actual built robot!

The wheels aren't the problem - I've got lots!

It's attaching them to something other than a gearmotor that's a problem for me. For example; running the wheel via a belt so the motor can be put in front of the wheel instead of by the side. I can find pulleys that'll attach to a D-axle, but no axle to attach at the other end. I guess most people just grind down a 3mm rod to make it D-shaped, or file out the inside of the wheel to make it a round hole (not sure how well that'd hold). Or they know where to get D-shaped rods.

Anyway, I've got some D-shaped rods on order, so all will be well in a few weeks. It's probably good to make some simpler bots, anyway. Less points of failure and all that. I think plan D is to make a wedge shaped pusher, with the wedge attached to a servo so it can change orientation when flipped.

I've also got an idea for a bot shaped like an EVE Online Hound, which I think I can build without needing extra parts..

And a 101-style lifter without the tracks (don't trust tracks)..

And a multi-armed grappler..