Work in Progress preview: An(t) Object to be Destroyed

Work in Progress preview: An(t) Object to be Destroyed

Decided it was time to retire PolycarbonAnt and replace him with a more easily maintained and less scruffy version of the same basic 4wd parallelogram-sectioned / invertible pusher design. Might be a bit old-fashioned but being a lousy driver, I appreciate not having to think too hard when an ant's upside down!

So, the idea is to make something that can evolve over time to become as close to indestructible as possible; each time it gets into a fight with a spinner and a weakness is exposed, I'll try to refactor that weakness out. Hence the name (actually borrowed from a 'sculpture' by the surrealist artist Man Ray): "An Object to be Destroyed".

Initial plan was to 3d print a body frame and screw on polycarbonate plates top & bottom . Having played around with it in Fusion and printed some tests however, I realised this introduced too many weak-points, as well as making it harder to prepare a stock of spare parts. So eventually I decided to go fully printed - but to try using one of the tougher nylon+CF filaments for all the body-work.
Given the price of exotic filaments, I want to get the design as close to finished as possible first. To that end, I'm using some so-called "premium" but actually "really not very good" blue ABS that I bought dirt cheap from the HobbyKing bargain bin some time ago. Although I wouldn't dream of using it for a real robot, it's proving useful for prototyping. Here's the latest prototype for Object 2B Destroyed, shown with only one of the wheel protectors fitted (if weight allows, I'll make that a full-length side protector, so it's easy to replace after a spinner catches us broadside):

Wheel diameter is 21mm and the body is about 13mm thich, so the whole thing sits pretty close to the ground. The row of holes at the ends are for bolting on a 1mm thick titanium sheet wedge and I'm planning to sandwich some 2mm thick neoprene foam between that and the plastic, to help absorb impact. Might even experiment with little wedgelets at one end for optimum acetate-busting - certainly got enough room to spare on the length. One big improvement already on most of my previous designs, is a separate battery compartment hatch, which means only 4 screws to undo to access the LiPO!

Next step was to print it up in something tougher. Options for Nylon + Carbon Fibre fil are currently a bit limited (without shipping it over from the States) but in the end I settled on something called "PA12 + CF5" from Fiberlogy, bought from 3d-Jake. Unfortunately. although the filament seems pretty good, the spool it came on is a nightmare; much too fat to fit in the air-tight spool holder that came with my Up 2 Mini printer. One thing one hears over and over again about nylon filaments is that they suck moisture out of the air like nobody's business and instantly become unusable... so the first job was to build a new spool container. Here's the result:

It's just a "Lock & Lock" plastic food box, to which I've added a simple 3-d printed spool holder and a nozzle for the filament & bowden tube. Though I say so myself, it's actually a great improvement on the Tiertime original (that thing on the left) - takes a full sized 1KG spool, it's even more air-tight and just as easy to load. Did a couple of simple test prints earlier, using the default ABS settings (270c hot end, 90c bed) and seems fine so far. Separating the print from the top support layer was a faff but absolutely no issues with warping or layer separation. First attempt at the full body is now printing - so in a few hours I should know whether Object 2B Destroyed is going to be a thing!
Stuart (Anthony's dad)
Top

Oh well, try again tomorrow. On the plus side i got to practice removing from the support layer. All OK except that big flat expanse in the base. Even with the 'Easy peel' settings, that was welded on to the support. Might try putting a slightly rippled surface on the bottom to see if that helps...
Still one heck of a learning curve.
Stuart (Anthony's dad)
Top

Good to see that you're still building!

I have noticed lots of fancy 3d filaments kicking around, but now I've just picked up some bargain-bin Nylon and it seems pretty good. At least, we'll try with the plain Nylon (Nylon 645) and see if that holds up better than the PLA which I used before (and two robots got trashed back in November, which seems ages ago) and didn't do too well against "Test Robot Please Ignore" or "Cosmic Burgervan"
Robots: Betsie - RaspberryPi controlled flipper bot with gyro stablisation - too clever for her own good?
Stacie - tidy flipper; 4wd driven by hair bands
Top

Nice chamfer around the switch cut-out, makes it harder to get accidentally swiched off. Nice detail.
Robots: Betsie - RaspberryPi controlled flipper bot with gyro stablisation - too clever for her own good?
Stacie - tidy flipper; 4wd driven by hair bands
Top

Second-time lucky - reduced the printing speed and this time it worked fine.
Here it is with the N10 motors slotted into place. 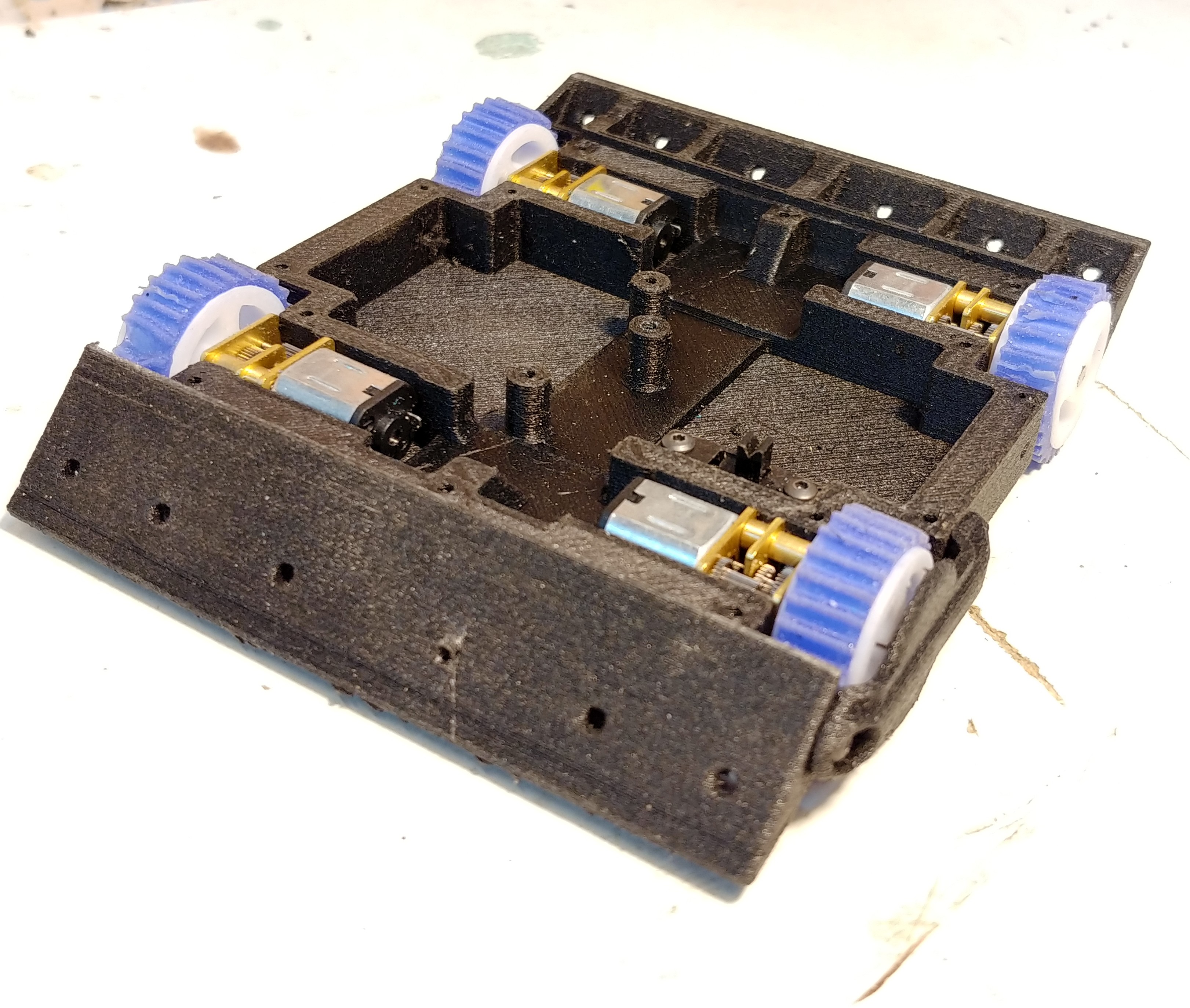 Next step is to print the two top-plates, then I'll sort out some electronics.

Pleasantly surprised at how well the CF Nylon takes a thread. Just as a test I tapped a couple of the screw holes with an M2 thread and it holds really well with the little M2 button heads I used on all my polycarbonate constructions. WIll have to do some stress tests before I decide between that option or self-tappers.
Stuart (Anthony's dad)
Top

All wired up and ready to go!

Battery compartment is a little tighter than I'd like, but thanks to my practice of snipping off the discharge leads and only using the balance plug, it will just fit.

Weight-wise, everything is fine - 111g with everything except the end wedge armour.

Talking of which, here's one end finished. IT's 1mm thick (allegedly) Gr5 Titanium, held on with M2 countersunk machine screws and nuts. There's a 2mm thick layer of neoprene rubber sandwiched between this and the body, to help absorb any impacts.

Just done one end so far (need to order some more machine screws) but it only added 15g - so even when the other end is done I've got another 10g left to play with. Will probably use that to add some more side protection and maybe a thicker top plate, especially over the lipo.
Stuart (Anthony's dad)
Top

Maybe a thin piece of Ti over the lipo, to make things a bit trickier for Shakey if you get drawn against "It's only a drill" ... ?