Between getting 3 featherweights ready for Robodojo & 3 other ants ready for Antfreeze I haven't had time. Epic Flail is next on my list & will be done over the week with a new, shorter chassis to accommodate the propeller better. The propeller itself is a 4" blade from a drone I bought off ebay to ensure it would fit onto the motor properly. I'm going to put a couple holes towards the ends of the blade to attach the flail ends onto & hopefully that should stop it entangling itself.


I don't expect a flail will ever win an AWS event but I still enjoy the 'disruptive' aspect of the design!

Never say never. Any bot with a decent driver stands a chance as long as it's still moving. Over the last year we've had a gyro walker & a clusterbot win AWS's for the first time so you never know!
Top

We can but dream James - we can but dream, though Nuts taking out Carbide remains an inspiration to us all (probably my favourite ever moment on RobotWars)

Anyway - Jes - No I haven't tried Nylon yet, though I know Peter rates it and recommendations don't come higher than that. I get nervous about its hygroscopicness.
For myself, I'm just so relieved to have found a PC filament which works for me that I'm happy to stick with it for a while. Still learning my way with 3d printing generally and I don't have as much time to experiment as I'd like. I did previously try the cheapo (£10 a kilo on special) Polycarbonate from HobbyKing and although I eventually found settings that worked OK in terms of extrusion and adhesion, the warping was terrible, even when printed in a warm enclosure and annealed in the oven afterwards. Shame really as it looks gorgeous in translucent blue! Someone recommended Polymaker 's'PolyMax PC', so I gave that a go and it was love at first print, even if it is a bit pricey. I'm using it in an Up 2 Mini with the default ABS settings on the perforated board. One time I tried using it on the BuildTak that Polymaker recommend but the BuildTak tore off when I tried removing the print. Since then I stick to printing on the Perf Board with a raft and I've no trouble with separation. Supports can be a bit tricky to remove from the print sometimes but the dimensional stability is spot on. Printed an open 3" cube with 1.5mm walls for testing Fleaweights and was blown away by how well it came out (with the HK filament it would have been more like a sphere).
Stuart (Anthony's dad)
Top

Time for some lighter entertainment today - the first half of an antweight cluster called "The Spin Twins", comprising a pair of fleaweight spinners (which will hopefully get the chance to compete independently as fleaweights, before they get totally destroyed by more aggressive ants...) 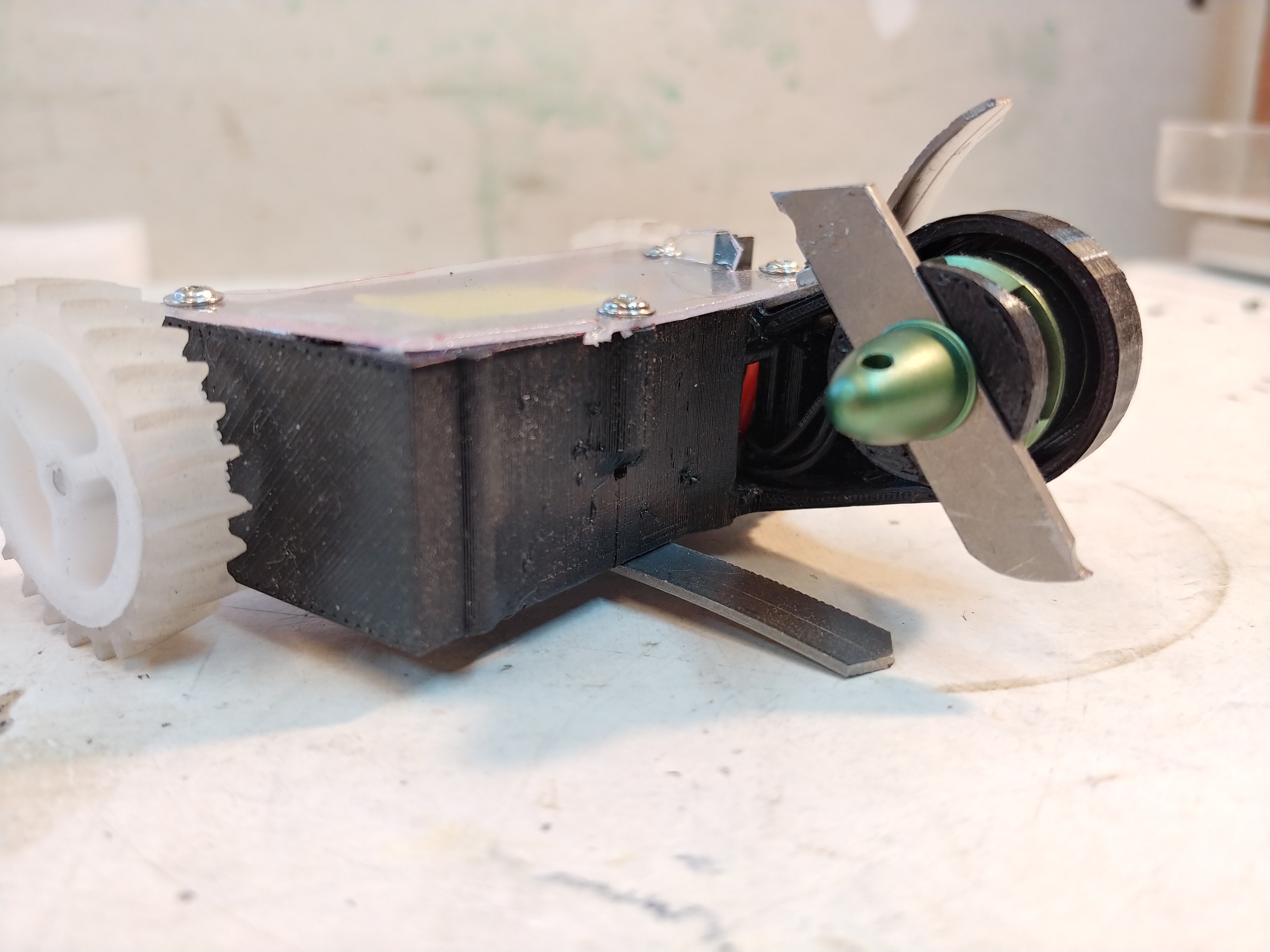 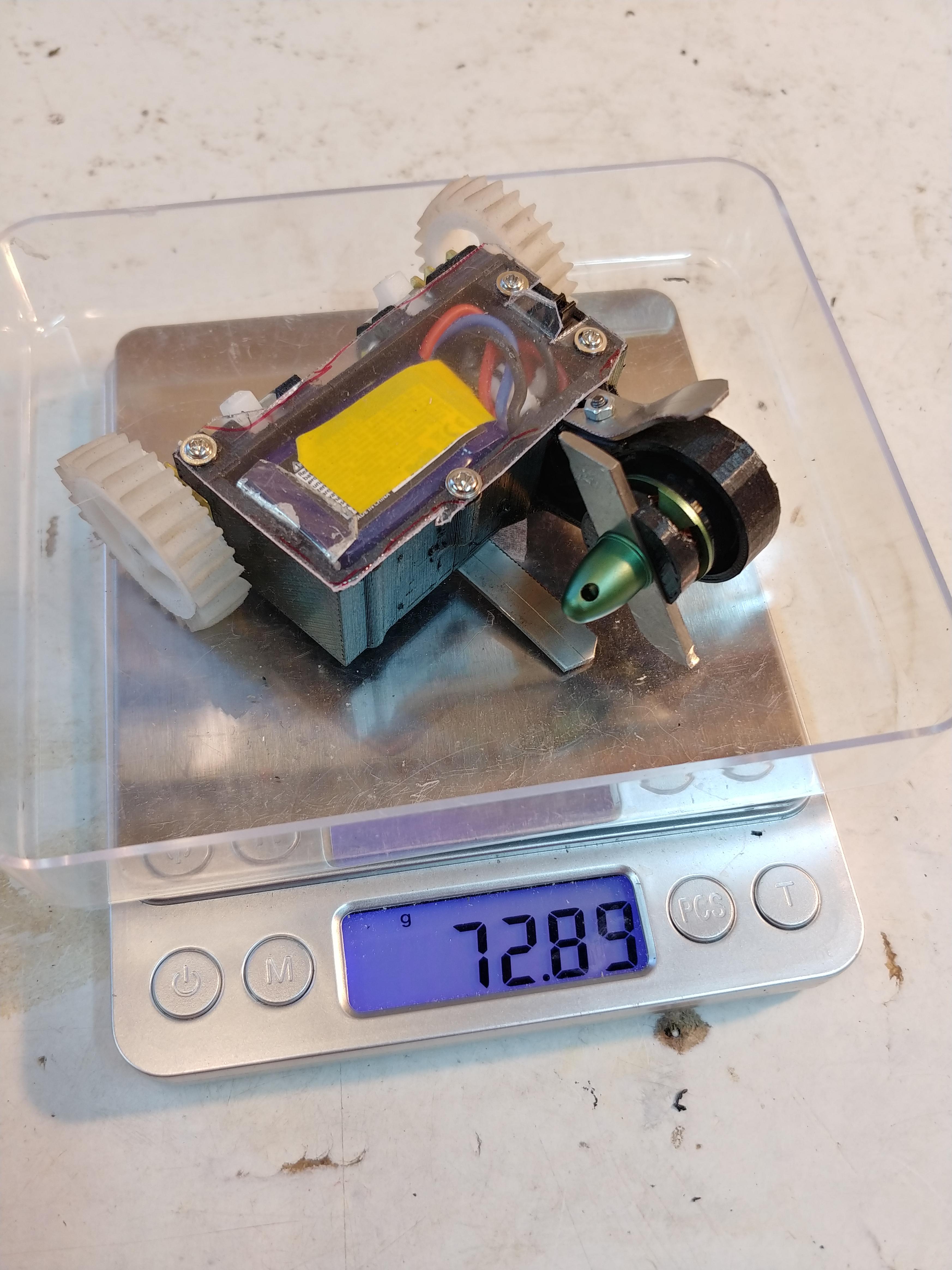 The Horizontal spinner is basically going to be the same but with the weapon arm rotated 90 degrees. Should have that finished soon.
Stuart (Anthony's dad)
Top

The breakthrough came thanks to discovering a Fusion 360 add in that creates airfoil splines based on NACA profiles. Still got a few tweaks but the desired downforce of 20g in combat mode now look realistic.
Stuart (Anthony's dad)
Top

I did think about that Eddie, though it would be tricky. I'm printing with very low infill to keep the weight down, so most of the strength comes from the 3mm stainless steel capillary tube running down the thickest part of the airfoil section and through which I thread the wire of the flails. Additional prop blades on wouldn't have that stiffening, so they'd be a bit vulnerable. All hypothetical for now though; when I fitted up that super-optimised airfoil with the wire and weights and tested it, everything got very bumpy and unstable, even though the flail itself was well balanced. Possible that I increased the pitch too far (it's effectively quite a low Reynolds Number, so couldn't rely on the NACA graphs) and unwittingly set up some vortex-shedding induced vibration that's being amplified by the wire & weights

. Too many complex forces at work I think!
Anyway, need. to. step. away. from. this. problem. for now - otherwise I will get too carried away and run out of time for all the other things I need to get finished before AWS61. So for now I'm going to stick with my initial basic airfoil prop (only a couple of grams of downforce but runs really smoothly) and instead concentrate on losing a few grams from the body so I can fit a 3s lipo, instead of the 2s. Did some tests with 3s yesterday and that really makes a heck of a difference, both to the speed of spin-up and to the driveability at full flail-force.


Meanwhile, the second half of the SpinTwins is progressing nicely. After half an hour with a cheap prop-balancer, a file, and a lot of luck, I managed to get the blade really well balanced, so there's very little vibration. The tiny 1304 brushless motor had quite a long shaft, which was only threaded half the way down, so I extended the thread all the way with an M4 die and shortened the shaft.
First attempt at a foot was a bit off - need to shorten the vertical bit of the dog-leg, then the blade should be nearer the horizontal. 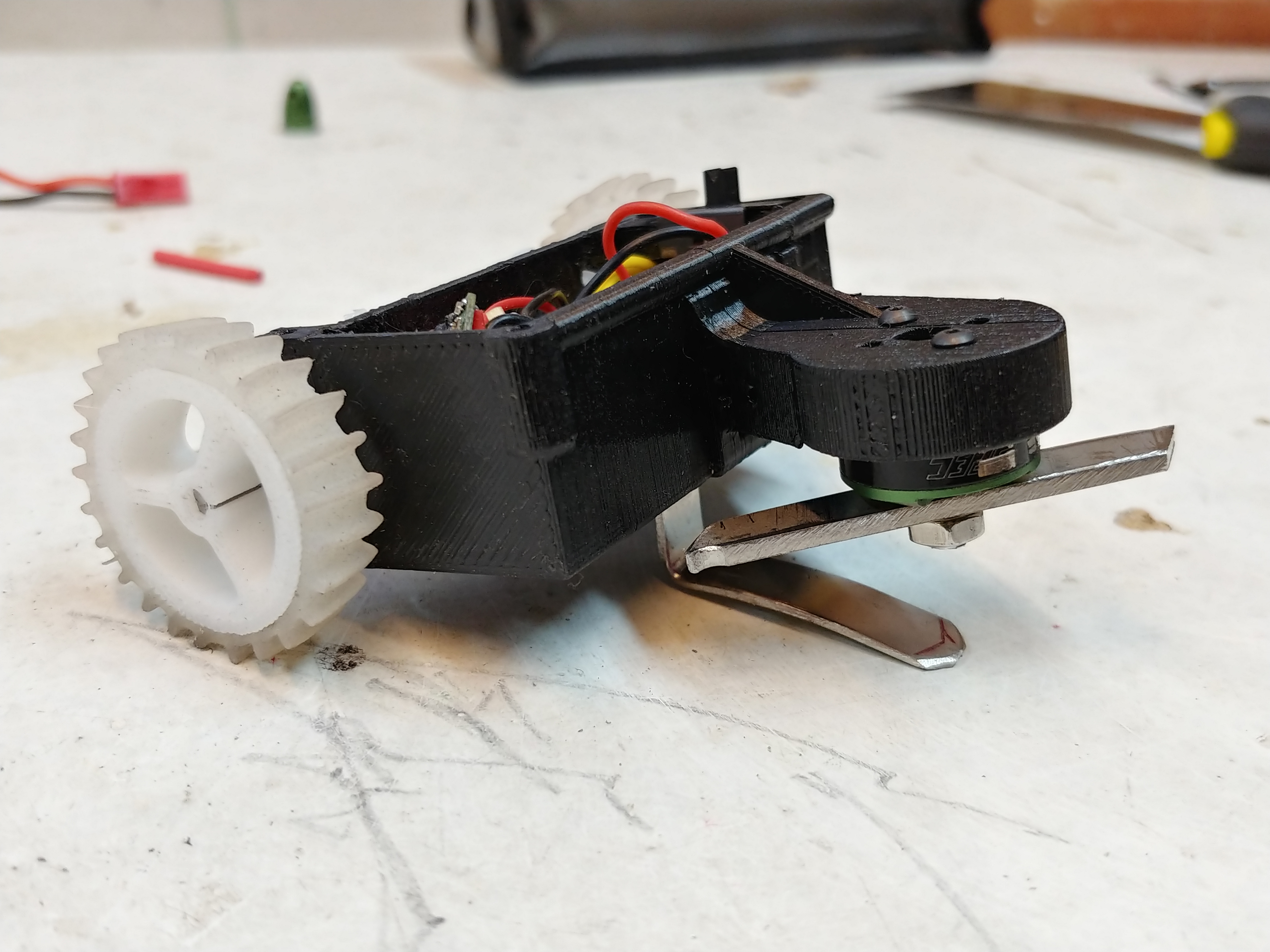 I was going to call the 'Spin Twins' bot-lets 'Tuffers' and 'Swannee', after England's erstwhile spin-bowling attack - but since I suspect cricketing references will be lost on some roboteers, we're leaning towards "X-Axis" for the horizontal spinner and "Y-Axis" for the vert. Might have to call the resultant cluster "The Cartesian CoordinAnts" instead...

It's an interesting thing to play around with

I imagine with more propellery power it's going to be increasingly difficult for you to turn left when the prop is at full speed. (something something Derek Zoolander reference)
Good luck with it!

i wouldn't worry about name references being lost...

If I'm honest Luke, I just thought it was because rockets are cool at first.

Prepare for trouble, make it double!
To unite all people within our nation
To protect the world from devastation
To denounce the evils of truth and love
To extend our reach to the stars above
Jessy
James
Team Rocket is blasting off at the speed of light
Surrender now or prepare to fight!

Didn't even occur to me until you just suggested it :p
Also I apologise to any actual Pokemon fans for any mistakes. It's been a WHILE
Jiggy Sawdust
Jammin' Good with Weird and Flippy
The Pushbot from Mars
Top

Turning left is already hard enough with TAFA at full spin. That's why it either needs a catwalk with only right-hand turns... or a 3S LiPO, a pair of HP N20s and my super-grippy tyres. Currently working on the latter option.
Stuart (Anthony's dad)
Top
Post Reply
29 posts