Hi everyone!
With a few local events happening near where I live in the next few months - it's time to bite the bullet and build an antweight at last

I have no clue about electronics beyond a basic understanding. But for my day job I run a suite of 3d printers and make 3d models, for the past 8 years - so I guess while there are big gaps in my knowledge, im happy with the CAD CAM part at least:P

Jumping in with a drum/disk bot, because it's what i want to make and I'm short on time to go through too many iterations (pusher->flipper->drum)

At this stage I have a 3d sketch done roughing out the design. And im overweight.
Are there any lighter smaller motors than the fingertech silver sparks? 10g each would be nice, as i dont care about pushing power. It just needs to move forwards with this weapon.
Also will likely have to lose some wheels.

Sketch. Drum is finished, it's a composite of aluminium shell, nylon core to reduce weight and titanium contact plate, as sparks are good

All weapon assembly parts are 80g. So have to fit the rest of the bot inside 70g hmmm. Is that doable?
Only armour is the front shield. 0.5mm sheet titanium 9g. Rest will be CNCed from something light, maybe delrin. 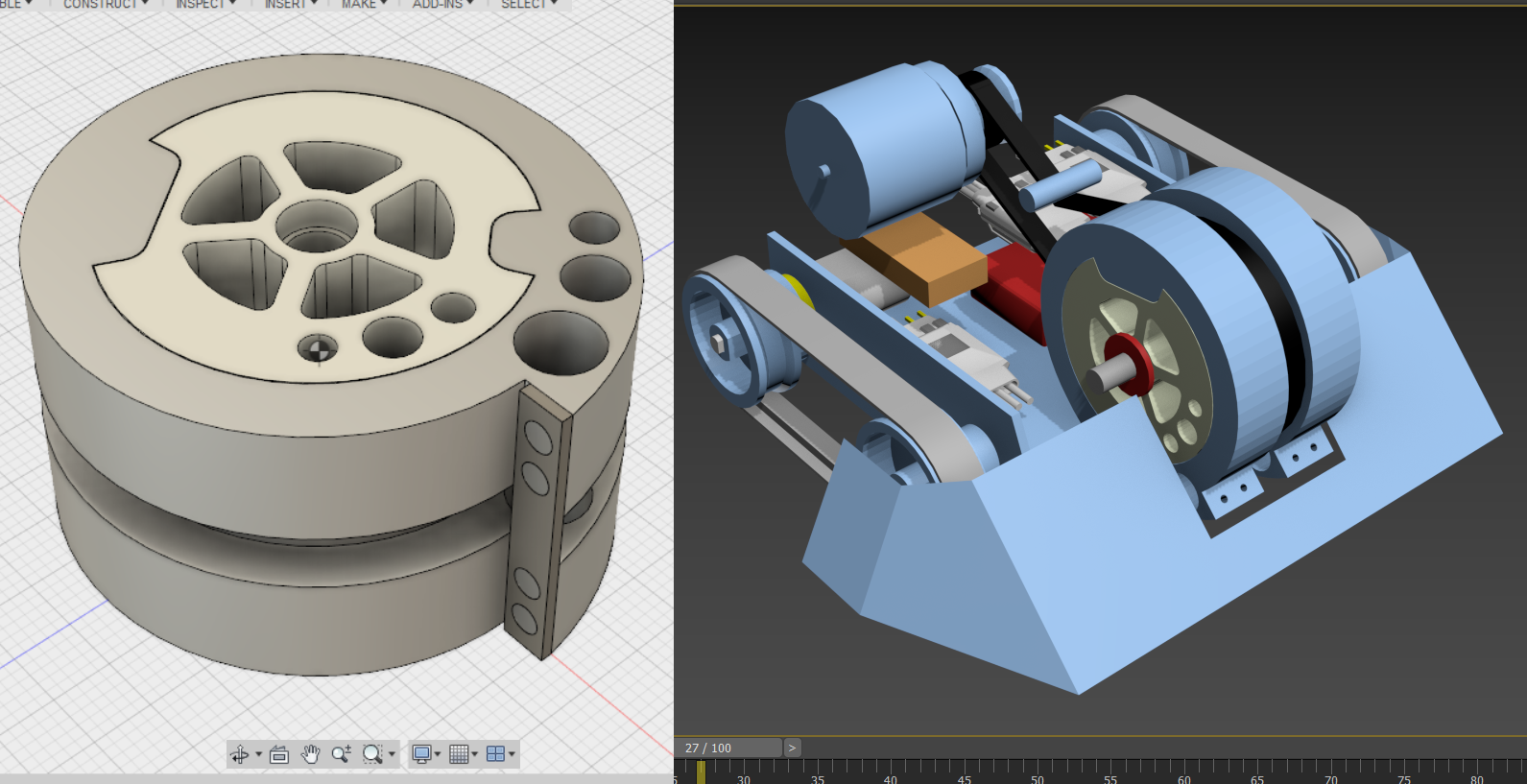 I used them in both my drive set ups so far. Basically just on advice from here and copying from other build diaries.

I won't comment on the rest of the design as you're already long ways ahead of me on the design angle of things. Other than that looks mean if you can pull it off in 150g.
Last edited by Derek Dudge on Tue Apr 10, 2018 7:47 am, edited 1 time in total.
My robots:

Welcome EddieJ...unless that's the robots name? Ha.
Looks like an ambitious project but should be doable. The fleaweight class has a 75g limit so what you are essentially doing weight-wise is strapping a big drum on a flea. Don't worry about electronics knowledge, most of us just connect the right wire to the right bit anyway.
My advice would be to build your drum and print your main chassis parts, make sure it comes out on weight and fits the cube, then worry about the rest. Start well in advance of whichever competition you want to aim for and then we can help you with any issues you might find on the way.
The drive motors that Derek suggested are fine for what you need. Pretty much everyone uses them.
Dave
Die Gracefully Robotics - Barely Even a Proper Team.
Top

For drive motors N20 size motors are the gold standard here, reliable, robust with plnety of power and cheap. You're belting things so may see slightly more friction in the drive than normal, in which case I recommend the pololu 6v 50:1 HP range of motors may work best for your robot. They come in at about 10-12g. Alternately you may get away with just regular old N20's of a 6v 500RPM or so flavour.

70g is a bit tight for a rest of the bot, it's doable but can easily be given more weight. One main thing is you can do hub motors on ants so essentially moving the brushless motor powering the disc INTO it. There's great ranges of 3mm shaft brushless motors about that are tough enough for combat and mean you're saving weight by not having to have a motor and central core. Current favourite motor is the DYS quanum 1806 (Purple), in addition this removes the belt leaving the disc freer to spin.
Nuts And Bots - For all your components and ready built antweights!

Hi EddieJ,
One thing I noticed if you put the blade across the belts slot it won't be able to rotate past the belt.
I am working at a similar design at the moment but with a longer drum and small lathe turning tools as blades.
Here it is so far I haven't shown the toothed belt.

Thanks for the replies fellas

It's great to find an active and friendly bunch of bot builders!

@Derek: That's it - drive motors, thanks for the link. I will add that to the parts list. You just saved me 20g

@DieGracefully: Hi! Lol yea Eddie is my name. The bot is called Ian

... until i can think up a name with more pizazz!
Glad to know that i may make it in weight! That's good advice, I will print the chassis as a placeholder in cheap pla on the ultimaker, then try to put the weapon together. That's the fun bit!

I have until september to build him, so should make it in time! We will see

@Shakey: Thanks! Great to be in a bot community ^_^
OK sounds good, I will go with 50:1s then. Im not too worried about having speed, just as long as it can turn on the spot to stop anything hitting the sides or back - it should be OK.

Yea i remember seeing something like that on a bot called "Sgt Cuddles". It does sound like a sensible thing to do. Only ... i would like to keep the giant motor on display so folk are more intimidated haha. But if it looks like weight is an issue for certain, will certainly look at putting the motor inside the drum.
After i CAD up a few more elements, I can calculate better guess of the weights

@Peterwaller: DOH! Thanks for picking up on that, can't believe that slipped by. I have fixed that now

Design looks great, it is pretty similar in principle xD perhaps we will be bot-twins!

Update time for the bot!

It's been on a diet

Decreased in size, lost wheels, motors are smaller, Drum is 20% smaller (it had to be done, 80g for a weapon setup was just going to be too tight after adding things like connectors, wires, mountings etc) Attached some new images

I was hoping to get some advice on electronics from the collective here. Mainly what are the smallest ESCs to run the Pololu gear motors on? http://www.hobbytronics.co.uk/mm-gear-motor-50

I was half looking at servos as an alternative since they dont need ESCs. Weight saving. Are they comparable in results to the gearmotors? Was looking at these ones
https://www.servocity.com/hs-5055mg-servo

And the receiver a small 4 channel which should do for 2 motors and a weapon
https://www.banggood.com/Wholesale-FrSk ... rehouse=CN

I have built drones before so... maybe that is influencing my choice of parts!!
If any veteran roboteers spots anything awry or can recommend better parts - please shoot away!

Good call on cutting down the weapon a bit, 80g is definitely a bit excessive. On to the questions;

For esc's the best option is the NanoTwo, as sold in Shakey's Nuts and Bots shop, it's very high quality, twin channel with mixing (drives both motors), and comes with a DSMX/DSM2 receiver built in, all while being smaller and lighter than the receiver you posted. Unfortunately supply is a bit limited at the moment, so a couple of other options to look at could be the DasMikro 2S6A (cheap, but very dodgy quality) or the FingerTech Tiny esc (good, but only single channel and not cheap). There are other ones out there but I can't say I've looked at any others in detail, personally I'd rather wait for a NanoTwo.

Servos can be used for drive, but are not recommended as they are very slow, everybody uses gearmotors for a reason. If your looking for other motor options pimoroni.com have good ones for £5 each.

Receiver looks good and small, but cant really say much as choice here is really dependent on your transmitter and which protocol it uses.


I would add that most antweight spinners use directly driven spinners, rather than a belt. If you could design it so the motor sits inside the drum you would save a lot of weight and get a much simpler weapon system.
Team Zero - AWS 58 Champion!
Zero - rambot - - Axiom - axebot - - Valkyrie - drum spinner
Blueprint - rambot - - Vampire - horizontal spinner - - Particle - ???
RBMK - quad spinner gyro walker - - Duality - dual spinner gyro walker
Top

I like the new look after the diet. Spinners in all categories are getting pretty generic and it's got personality now.

I echo what George says about the Nanotwo. Controller and reciever in one teeny tiny package, would solve a lot of your issues. Supply and demand becomes your only concern then.
Dave
Die Gracefully Robotics - Barely Even a Proper Team.
Top

@George:
Thanks a million for the advice on parts. I will keep an eye on shakey's shop. Im eager to get started so may try and pick up some other ESCs in the interim. Would rather 2 ESCs ideally - just because i can actually fit them in the bot then xD it's getting tight!

I have a Taranis x9D plus controller already for drones, so getting a receiver that works with that would be great (even though they may be overkill... dont need to control the bot from 1km away!)

Sound advice on the nested drum motor. It would make sense. Although i am a little keen on keeping the belt so i can gear the drum faster/ slower and also have the option of switching the weapon to a second configuration later. I may fall back on nesting it if the weight doesnt fall in under 150g

@DieGracefully:
Thanks! Hopefully when the chassis gets designed, it will amp up the personality a little more too