Why not use the charge plug to power your robot, and tie (or cut) off the discharge connector?

I don't know how much current the 2S packs charge plugs are rated for, but I guess it's probably enough to run an Antweight, especially if it's not a spinner.

I certainly considered doing this, it would save a bunch of unnecessary tangley wire.
Robots: Betsie - RaspberryPi controlled flipper bot with gyro stablisation - too clever for her own good?
Stacie - tidy flipper; 4wd driven by hair bands
Top

the 2s balance connectors have gotta be better than the Pico connectors. I'll stick with them to see what happens, with a lipo bag close to hand.

4 days to go before Botfest. Quite looking forward to it, as it's a lot nearer than any of the AWSes get, so I don't get a stressful 4 hour drive either side, and it's also more relaxed generally.

I've been very slowly upgrading the bots in readiness, and both are a tweak or two away from completion..

Sprouting Potato is just missing a wedge, thanks to the original plan making it almost 15g overweight. It had a chunky steel hinge, steel M4 bolts holding it on, and two steel wallpaper scraper blades as the wedge itself. Detached from the bot, it weighed 35g!

I've ordered some nylon hinges, which I'm not sure will be up to the job. If not, I'll have to go for a dubious cable tie plan. 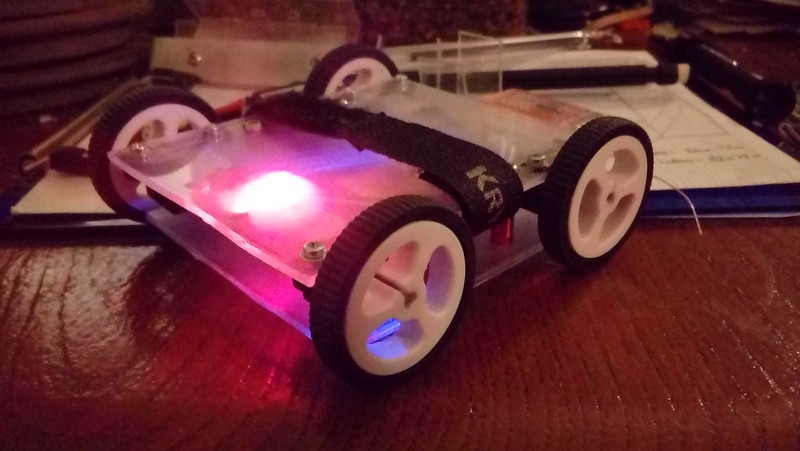 Fermented Melon is all wired up. Some of the controls are the wrong way, but it's on the Devo, so I can switch them around easily enough. All that's left is to cut out the side armour and print better quality wheels. Did I mention that the top now hinges completely forward? Well, it does, which makes access a lot easier. 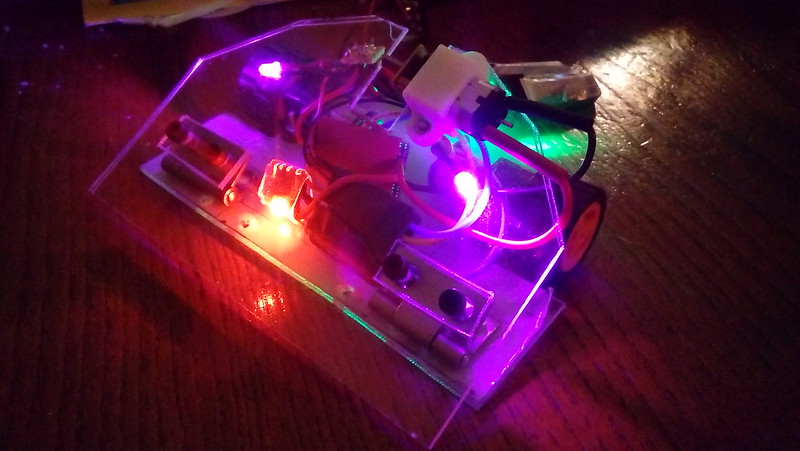 I may also have been adding LEDs here and there..

them led's look cool... kinda like the cd drive of an old aiwa stereo...

depending on the size of your hinges, you could maybe cut 1 in half and use the 2 halves instead of 2... would save the weight of a hinge plus the extra hardware... or 2x pieces of polycarb bent at right angles (like an "L" bracket) with a nut and bolt creating a hinge... just repeat for however many hinge points you want
i figure polycarb would be up to the task and save weight...

personally, i use the servo as my hinge and attach my wedges to the horn via an arm... but i figure you would need a slight redesign for that so give the polycarb a go... best part, you could make it out of scraps left over.
Team Rocket
Esper(4wd flipper)
Mantis (4wd grab 'n' lift)
Dominus (4wd overhead drill bot)
Fennec(4wd flea and 1/2 cluster)
Gizmo (4wd flea and 1/2 cluster)
Top

I was already using just the one hinge. The nylon ones were too flimsy, so I just added it as a fixed wedge in the end. Weight: 144g.

Botfest was the other day, and it's a good event for testing or dialing in robots, as you get a lot of fights. I needed the testing, as I hadn't test driven either robot properly. There are no flat surfaces big enough in my house, so all i'd been able to do is test that they drive in the direction that I was hoping they'd go in. I need to build my own arena!

As my memory is so bad, I'm afraid I can't remember exactly who I had fights with. Some of my fights were over so quickly that I'm not even sure if I had a fight. That brings me to my first bot; Sprouting Potato! 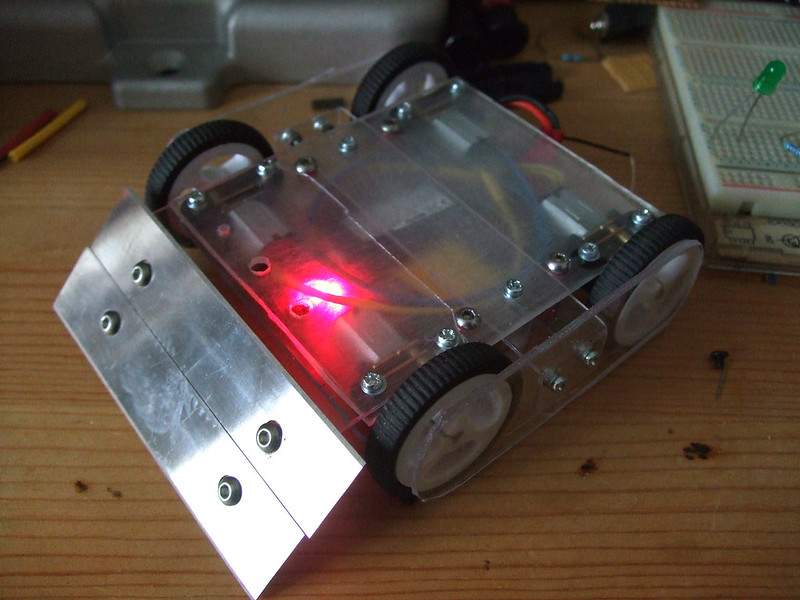 So, the wedge worked well, even tho I'd forgotten to bring acetate. The same cannot be said for the drive system. It's using 1000rpm 20:1 motors with 32mm Pololu wheels, because I'd superglued them to the motors for an AWS rush job.

That gives it a top speed of about 3.75 mph, which doesn't sound like a lot, except that it's 66 inches per second, so it can get from one side of the arena to the pit in half a second. Can you guess what happened a lot? 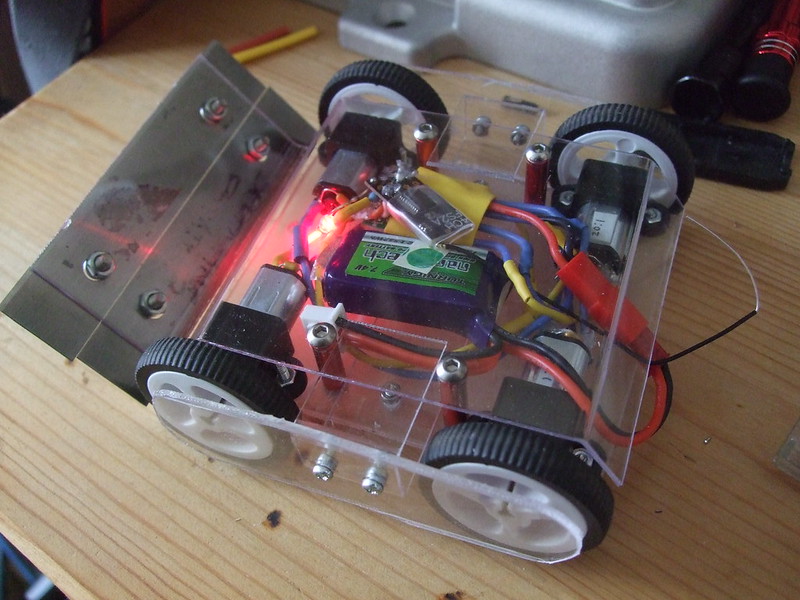 With a bit of tweaking to the TX, and some practise, I got it handling in an almost manageable manner. I think I even won a couple of fights! ooh, and I got to test the wedge against paulmchurd's spinner, which was fun. It survived! So did he, of course, and I spent the rest of the fight badly driving and exposing my rear to him. Scary!

And then there was Fermented Melon! I was starting to think that I might drop fermented melon and do something else, but after the fights it had, I think I'm gonna keep it. It was fun! 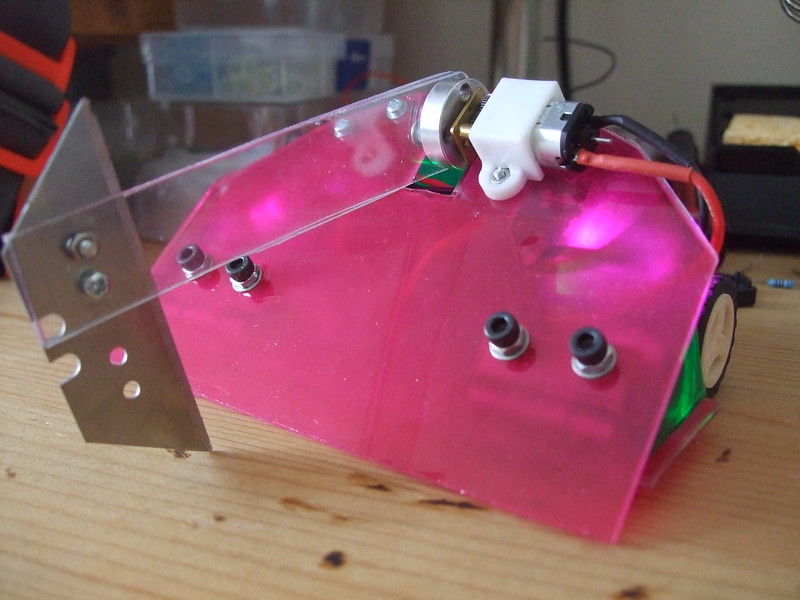 So, that axe.. I remembered to fire it a lot more this time around, and I found that it likes to get stuck into wood. Arena floor wood. A lot.

It seemed to get better and better at attaching itself to the arena floor as the fights went on. I don't think it caused anyone any actual damage, and it was more use as a self righter and as a grabber, which was kind've intentional. It's more for fun than damage dealing. 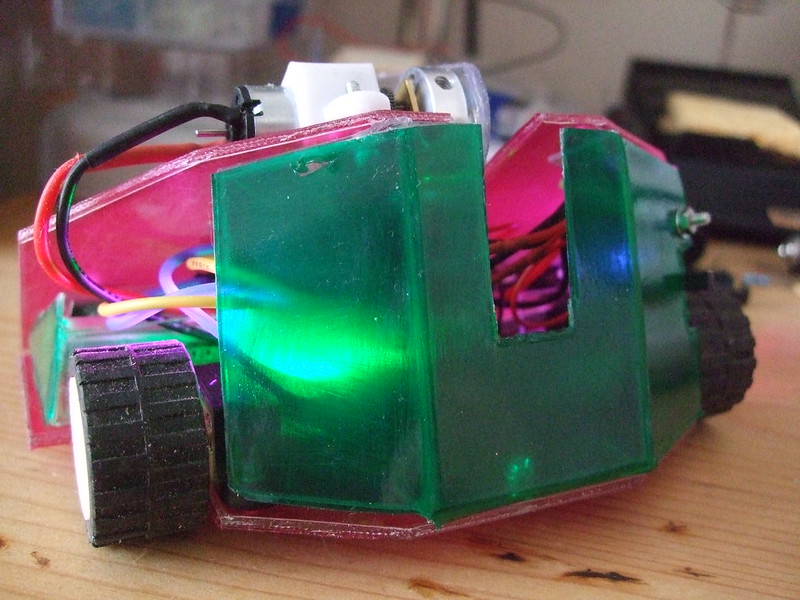 It had a couple of longish fights when I managed to curb my lemming-like tendency to drive into the pit, and even managed to go to the judges against the eventual winner, Bodacious. I lost because I got stuck in the arena so much.

I also fought the other axebot in the competition (think it was called 'axe on, axe off') and won, which I certainly wasn't expecting! ooh, and I fought another spinner, which hit one of the long bolts on the front of the wedge and produced a lovely spark. I didn't try feeding the axe to it, as I didn't want to have to clean up bits of broken blade from the arena.

All in all, I was quite happy with my bots. Well.. not Sprouting Potato, exactly. I was just happy it worked, and wasn't a complete embarrasment. It was kinda cool, in a way. It was a great event, and many kudoses to Ocracoke for organizing it. I'm glad it's still small and a little bit amateurish, as it's way more relaxed than AWS or Antfreeze, and you never know who might win.

Here's a vid of the axe versus some 1mm polycarb, and then what happens when it hits wood when it misses:
https://youtu.be/dctTCEMmjGA
Team BLEEP Suspicious Houmous / Sprouting Potato / Fermented Melon / Black Carrot
Top

I had a pretty fun battle vs Melon. Either your bot or the other axe bot got inside flipit and half cut the power cable which then kept shorting out the receiver. I’ve resoldered the entire robot to fix the problem. So someone’s axe worked!!!!
Top

you can save weight on sprouting potato by switching the side guards to 1mm, and also replacing the motor mounts with some cable ties... you should be able to save enough weight to get that flipper back...

also setting rates in your tx can get the speed down to be more manageable... a lot of fiddling to get it right though...

and maybe an axe stopper which catches the axe shaft leaving 1-2mm clearance between the head and the floor... something rubbery would work best... maybe a dollop of silicone sealant in a well placed spot might work...

otherwise, glad you had fun and had a chance to fight, from experience i know that messing about with your bots and actual fights are so different... its good to get the experience and to see what improvements you can make to your bot and your driving skills...

that was probably the other axebot, then.

i did enjoy ramming stolen concept right in the gubbins with sprouting potato. even though it didn't achieve much, i think it was my favourite moment, as i just really wanted to ram a spinner to see what happens.

the side armour on sprouting potato is only 1mm. same goes for the bottom armour. the top is 2mm for rigidity. there are quite a lot of ways of saving weight, but they meant either re-cutting the armour, which i didn't have time for, or ordering more bits, which i didn't have time for either. potential weight savers are the aforementioned cable ties, nylon standoffs, holes in the 2mm polycarb, attaching the wedge to the side panels instead of the top, cable tie hinges (with polycarb insert to stop it getting stuck), a non-steel wedge, and probably other things besides. i never know until i try, and basic hinges were first in line due to easiness.

having said all that, it's irrelevant, coz my next learning experience is gonna be gear-driven 4wd and caterpillar tracks (one of each). halving the amount of motors should save a bit of weight.

this may have been sprouting potatoes last fight.

as for the melon, it's armour was the weapon stop (it's only polycarb on polycarb). i just didn't think it would get so stuck into the arena! I'm not sure if I'm gonna keep the axe, or swap it for a proper grabber. the grabber would work better, but axes are just cooler. hmm...
Team BLEEP Suspicious Houmous / Sprouting Potato / Fermented Melon / Black Carrot
Top

So, I thought I had lots of time to plan the next bot. I made a 4-bar flipper design that rocks, and I intended to field it for AWS 58, but I felt like a rest, so didn't build it straight away...

Then my wife got a job in Leeds, and so we need to move house before September, and now we're trying to make our house look presentable to buyers (cover up damp, repaint everything, refit kitchen, sift through the endless mess of two hoarders and a Lego-rich kid). No time for bots!

But, the old bots still exist, and just need a few tweaks. Fermented Melon hasn't even had it's batteries removed since BotFest 2, which probably isn't a great idea. I need to literally cut a few corners and make FM fit inside the 4" cube. I might even try and find a weapon that doesn't just attach to the floor all the time. The weapon motor got dirt in it, and jams a lot. I'm hoping I can just clean it to fix it. Sprouting Potato is in bits, but the electronics are still wired together. Now that it's free of the big wheels, I can make them a bit smaller, and hopefully make the whole bot a lot more low profile and a smidgen more controllable.

I think I can fix them up in time for AWS 58. I just need to convince the wife to let me take a break from tiling for a day. How hard can that be?