Outstanding! The antweight world definitely needs more flails. Who knows - if the Gods of Antlog are smiling we might even
get some flail on flail action on Saturday...
Stuart (Anthony's dad)
Top

Thanks! Part of the reason I came up with the design in the first place was there were no motorized flail bots in any weight category at the time. A flail vs flail fight would definitely be interesting, but it'll be very unlikely we get drawn against each other. Assuming it doesn't get destroyed in the main tourney I will be throwing it into the glow in the dark rumble though so you're welcome to face me there.
Top

Even though AWS60 was on paper my poorest performance all year it was still a pretty memorable event. Instead of writing out big dull paragraphs I'll just make some bullet points & keep it somewhat briefer:

1) The Little Sytes definitely need internal upgrades. Currently they can only run on 1s due to the speed controllers they use. They managed to pick up 1 win thanks to an opponent's suicide dive, but were easily overpowered in the subsequent fights.

2) Epic Flail had to have it's weapon rebuilt the night before after it caught on the chassis & broke itself during a test. The new flail, made from a cocktail stick, fixed this problem but wasn't balanced properly so it occasionally tangled up on itself.

3) I was one of the few fortunate enough to fight antweight original Pants 1v1 with Rented! Since this was in the losers bracket & Pants lost (sorry about the wheel) I may very well be the last ever opponent for the antweights that fought on Robot Wars Extreme and at AWS1 (excluding AWS regular Combatant which has evolved & drastically changed over the years) which is rather flattering.

4) Rented managed to get through the tournament unscathed, despite fighting Dimitri 4 & Kwyjebo, 2 strong verts, but I entered it into a whiteboard against, amongst others, Test Robot Please Ignore. During the bout, Test managed to get a hit on Rented which damaged the lid, the back & the Nanotwo. This particular model of Nanotwo has a receiver built into it which damaged it in such a way that it won't drive anymore. Since the receiver is no longer in production, this means I now have to replace both the drive ESC & the receiver. Since Nuts & Bots don't have any Nanotwo's in stock, Rented is out of commission until I can replace it. Dang. I also plan to put some kind of metal plate on the back to prevent it from happening again, but it looks like I may have to retire Rented soon.

5) I am a far better tech checker, judge & arena sweeper than I am commentator.
Top

Over the Christmas break I built a new ant, my 1st proper spinner. Introducing Fragile! 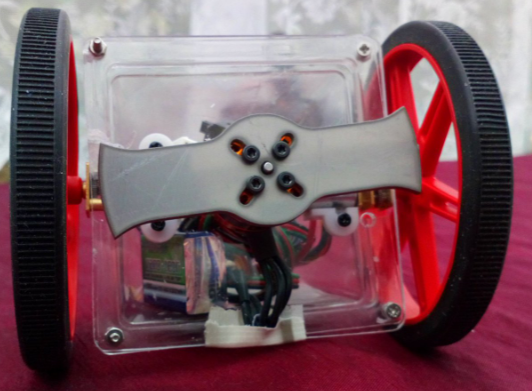 Fragile is a face spinner/thwackbot designed to drive up on top of wedges, then to hit the top panels of bots (or whatever's on top, such as grabber arms, axes etc) when the drive is slammed into reverse. It's also one of the few thwackbots that is capable of reversing without swinging the body over, which is necessary to stop the spinner blade from hitting the floor when changing direction.

It does already have a few issues; once I'd finished the electrics I weighed the circuit along with the weapon bar & wheels & found the lot weighed 135g, leaving less than 15g for the chassis. The chassis is therefore a yoghurt pot with a 1.5mm poly lid, which will be extremely vulnerable to big spinners, especially verts. I'm hoping the big wheels, weapon bar & scrunchiness of the pot will protect it somewhat, but I've named if Fragile for a reason. The pot also isn't quite the shape I originally intended, I wanted a pentagonal shape to utilise the space permitted by the cube better, as well as to stop it getting stuck on the base but with a grand total of 0.2g left to play with I think I'll have to make do. Speaking of the cube I need to move the wheels back a little so it can fit inside properly. I might be able to get away with adding nuts between the motor mounts & lid with a sticky pad to hold the motor still.
Top

Looks very good! Reminds me of Raphael from the MW class a little. Hopefully will get a chance to fight it with my vertical spinner at AntFreeze.

Ocracoke wrote: ↑
Sat Jan 11, 2020 5:21 pm
Looks very good! Reminds me of Raphael from the MW class a little. Hopefully will get a chance to fight it with my vertical spinner at AntFreeze.

Thanks Lucy!! The idea behind the bot was originally "what if Crossfire had Gabriel wheels" when I first saw KoB back in 2017, but I can definitely see the similarity with Raphael. Always happy to face you, but do remember if you trash it too much I won't be able to bring it at Botfest in the future (probably a good chance you could fight it there actually).
Top

There is the possibility of that fight happening

TBH, I don't think any of my machines have every trashed another so it'd be a new experience if that happens, I'll probably be more in shock that something I built "works".
Team Kaizen

So AWS61 had a lot of ups & downs for me. 3 of my entries took early exits but then something happened & The Little Sytes of all bots went on solid run, making the group semi-finals in the losers bracket before eventually losing to Stewie, who went on to finish 4th overall. Massive thanks to Sion for his excellent driving skills BTW. I then entered one of them into the Fleaweight rumble & manages to take 3rd, winning me my 1st trophy! Despite this, I still think they need more power so I've ordered some N10's & hope to pair them with MarkR's up & coming ESC'S with built in receiver.

I debuted 2 new bots, The Big Syte & Upgraded For The Roboteers Pleasure. The Big Syte is simply a much larger version of the clusters, along with some optional attachments, being a large aluminium wedge for spinners as well as a 'hat' made of card in order to stop bots driving on top of the wheels & preventing the bot from driving. The hat worked well in a friendly match against SPEEEEEED & the armour was great in the wooden spoon rumbles but unfortunately neither could save me from being outdriven in both 1v1 matches.

Upgraded is my new axe bot, which has a very steep front so even with acetate it can't really get underneath anything. A lucky win was followed by an utter asskicking from Unorthodox then a match against Best Boi & Virus where I had the upper hand until I drove myself off whilst under no pressure. Oops. I do have 40g to play with for Upgraded so I'll have to figure out some method of attaching wedglets or something.

Epic Flail was back, sporting it's new propeller which succeeded in preventing the entanglement issue, but the downforce severely affected mobility which allowed it to get shoved around easily. It had a much better showing in the wooden spoon rumbles, finishing 5th overall. 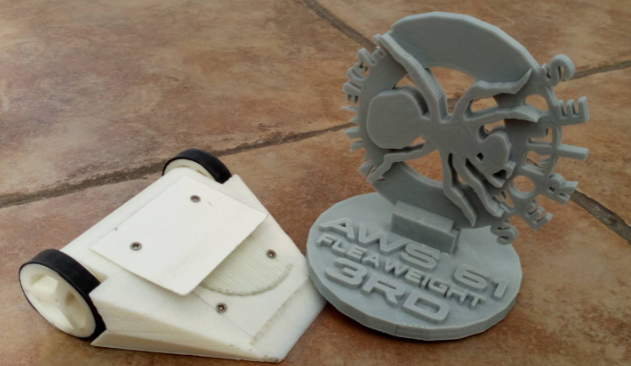 I'm glad everyone had a great time, I had a look at the live stream a couple of times, it looked good.

Don't hold your breath, but I am still working on it!
Robots: Betsie - RaspberryPi controlled flipper bot with gyro stablisation - too clever for her own good?
Stacie - tidy flipper; 4wd driven by hair bands
Top
Post Reply
29 posts