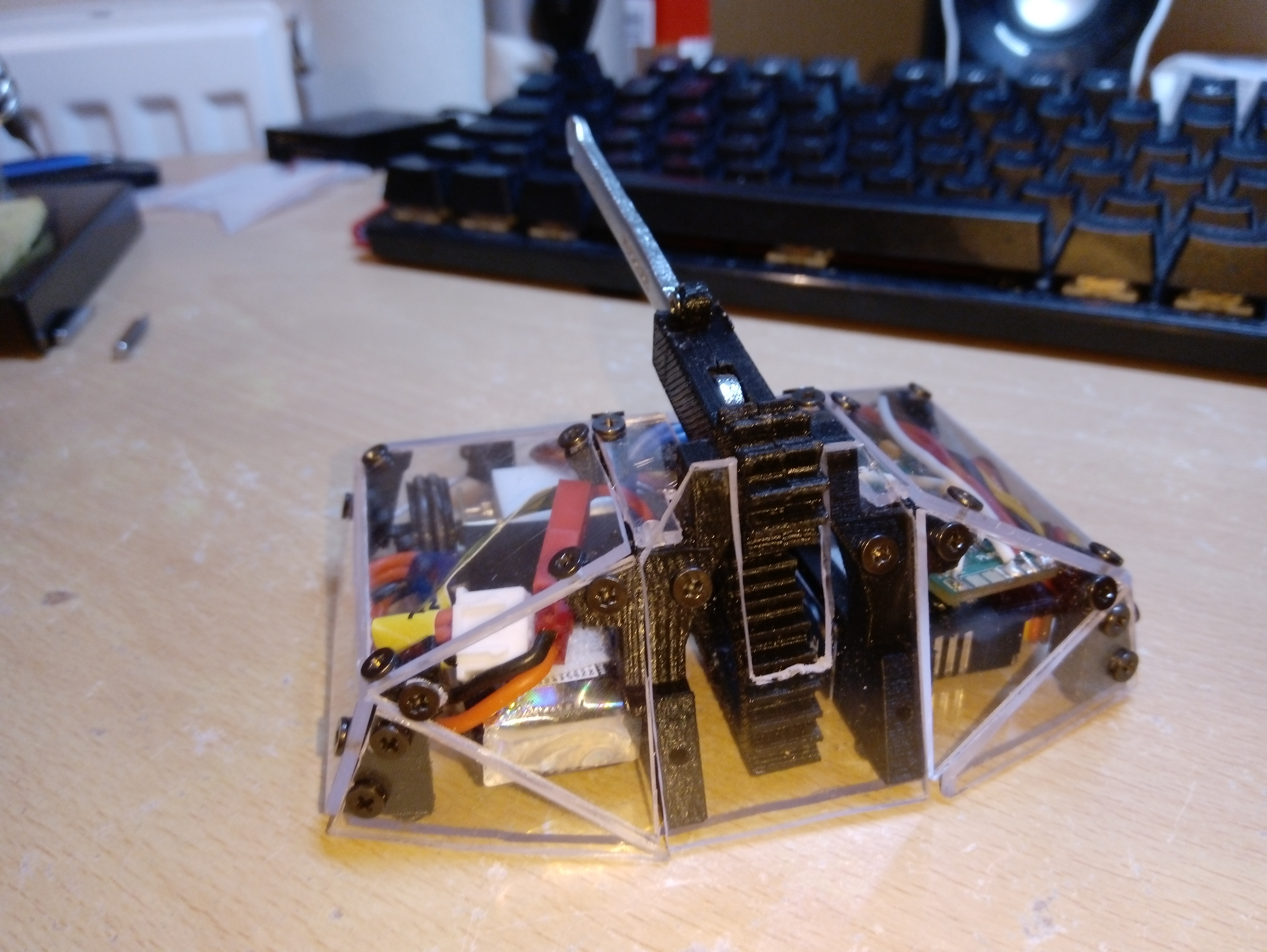 Here it is next to the previous chassis for comparison. It's shorter, but having the 2 stage sides actually means that there is more room inside. Plus, the whole chassis is shorter by 20-30mm or so. 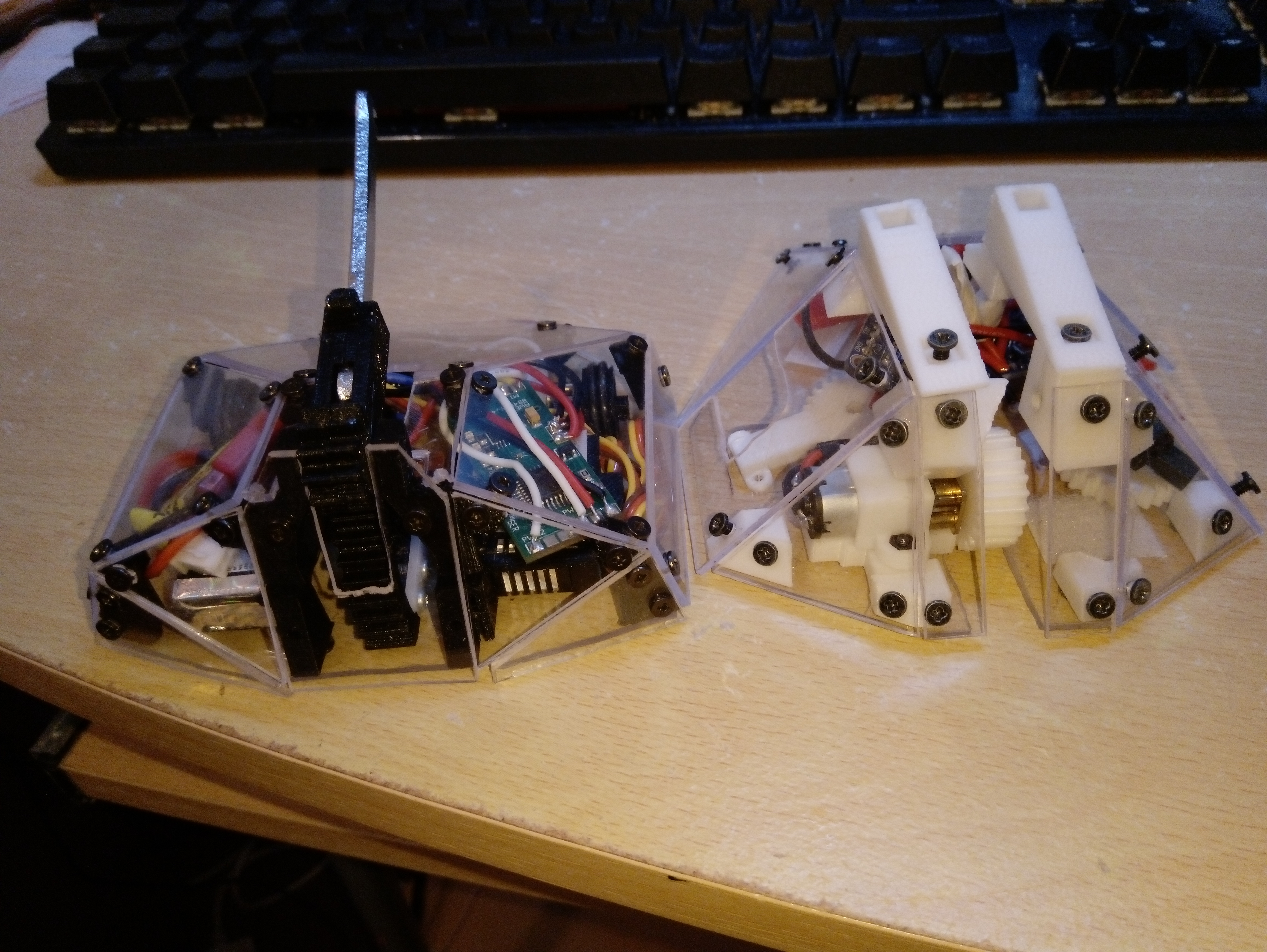 I don't have time to sort out the front attachments before RoboShowdown, but with a total weight of 132g, I should have plenty of wiggle room there. You can see in the video that the right hand drive seems to lack some grip, so reversing is a bit janky.

In other news, I've upgraded the motors on WAI - 1000RPM@12V for the weapon and 1200RPM@12V for the drive - and it's much faster now! Still need to upgrade INABIAF but that's just a simple motor swap.

I've been working on INABIAF to get the Flysky receiver in there - stripped off the case around it and need to insulate the heatsink on there (I think it's a heatsink? A slab of metal on top of it. I could remove it to save weight but I don't need to). For some reason, turning isn't working. I can move forwards and backwards, but regardless of which way I plug in the signal wires from receiver to Arduino, I can't turn. Will have to see if I can get it sorted before Saturday.
Thomas

RoboShowdown yesterday was great fun, a more relaxed affair than the AWSes I've been to by virtue of not having anywhere near as many bots there. There were some nice whiteboards and special fights as well which were entertaining to say the least.

The day started off with the 2v2s. I was planning on entering with my brother, who was tagging along for the day, but I couldn't get the FlySky receiver working in INABIAF. LimaHotel had no teammate so I had my brother use WAI alongside Jiggy Sawdust as a team of grippers. They won 2 fights before being eliminated - good job!

The main tournament went par for the course for my record - each bot won a fight before being eliminated, as well as a 'fight' between WAI and INABIAF that I elected to take WAI forward. The first round fights were interesting in that I fought the same team in each fight - PM2 and WAI won against their respective opponents Hyper Velocity Star and Sun, while INABIAF lost against Error.3xe.

I found the time to print off some forks for Percussive Maintenance 2 before the event - they screw through the centre front plate into the 3D printed bracket. Unfortunately, they don't seem to work very well for getting under opponents (at least, without acetate). The more pressing issue is that they seem to make the gear slipping issue much worse. I've worked out why the gear slips - it seems that the servo is so powerful that when the axe comesdown and hits something, if it can't move further down, or the body of PM2 can't lift up to facilitate that, then the servo gear just forces its way past the weapon gear, which means the forks are a bad idea for this bot. What's that? Reduce the power of the servo? Nonsense! (In all seriousness, that would be the better idea, but I like how ridiculously torquey the axe is, haha!)

The new plan is to add an aluminium plough to the front, hinged in the same way as the forks, so at least I've got a low ground clearance. The idea of hinging the plough should also in theory help defend against horizontal spinners, as the plough will be able to move out of the way of the blade, reducing the energy transfer.

Working as Intended... is not working as intended. It just can't grab anything, as there is a lot of give in the jaw mechanism. So I'm going to redesign it for AWS59. I've got an idea for making the teeth backed by springs, so when I bite something, the springs will compress. That way, if the jaws have some give in them, the teeth should still be exerting force to grip the opponent. I also need to sort out a self-righting mechanism...

It's Not a Bug, It's a Feature is also going to get a minor redesign. I want to fit a KingMax servo into it, and for that, I need more space inside. I am also going to turn the front plate into an aluminium plate - more on that below.

Two particular fights stood out to me at RoboShowdown - WAI against The Tim Rackers Experience in the main tournament and a grudge match against INABIAF, which while I lost both fights, were both very entertaining. In both matches, TTRE tore of the front plate of both bots (the internals were fine though, so it did its job

). What I'm thinking of doing for front plates in the future is to make them out of aluminium, and add tabs to the sides that will fold over the side plates, and this is where the plate will be screwed in. This leaves a completely flat surface on the main face, and I think it should also hold up better against big horizontal hits, as the force is not going to be directly pulling the plate away from the 3D printed bracket (and therefore easily stripping the PLA holes). Fingers crossed.

I've got a lot of work to do before AWS59, but I've got just under 2 months to prepare, so I should be fine!

P.S. - I came up with a new robot name - if I said to you "RGB Makes Everything Better", what do you think the robot will be?

holy moly... your going to build a rail gun bot...

holy moly... your going to build a rail gun bot...

With AWS 59 only a few weeks away, designing and building has stepped up. I've finally made the jump to use metal on my bots, with the introduction of a new hinged aluminium wedge/plough for Percussive Maintenance 2. 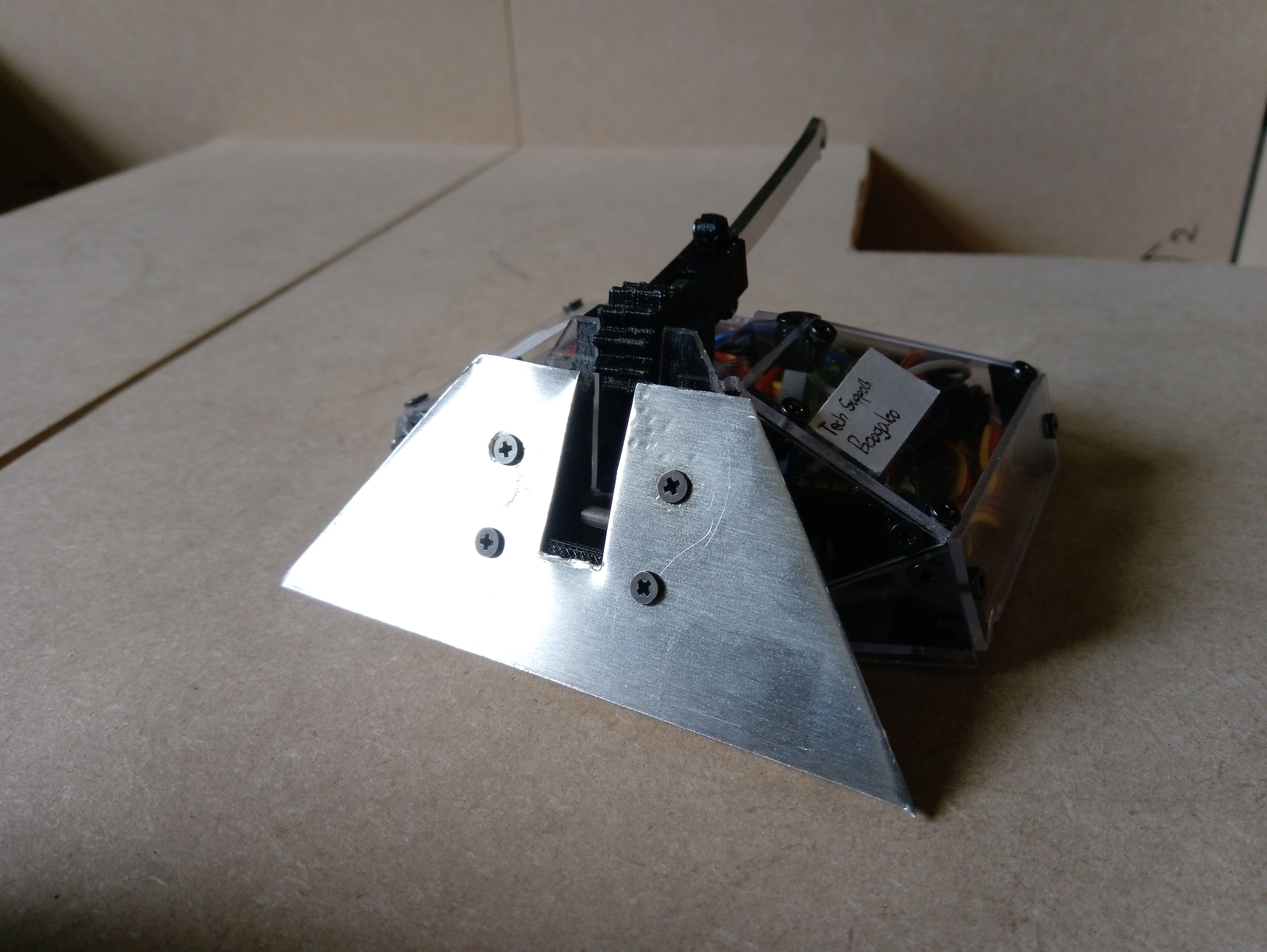 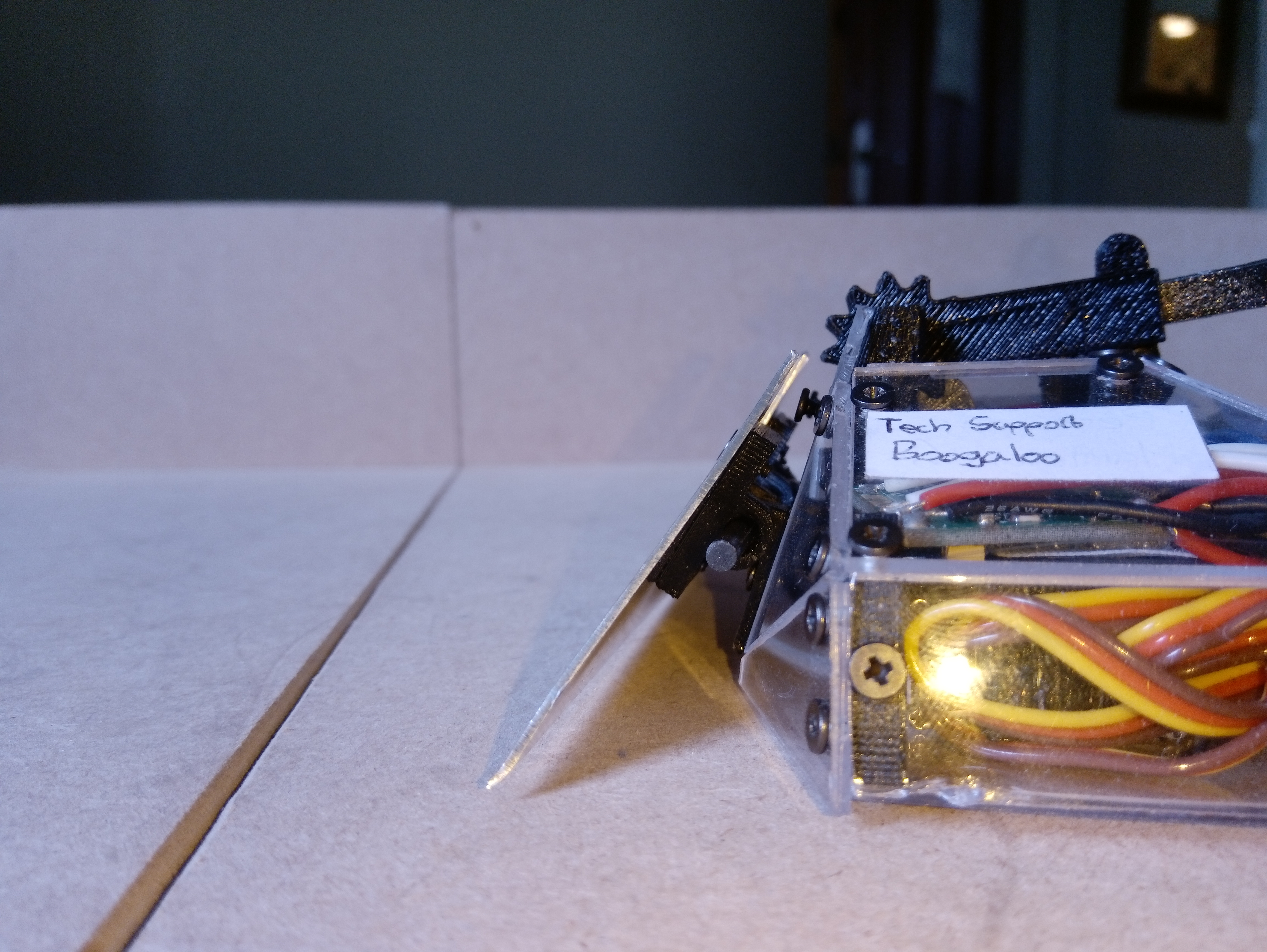 It's 1mm 6082, which surprised me in how easy it was to cut with tin snips. Drilling was a bit more of a chore - the screw holes are larger than they need to be as I found that my Dremel kept slipping, as I was holding it. I think I'll pick up one of those Dremel stations that can turn the Dremel into a drill press.

One last thing to do is I am going to add some springs at the top in between the plough and chassis, which should keep the bottom edge of the plough scraping the floor.

I've also spent a lot of time CADing the new version of WAI. Left is standard configuration, right is a aluminium wedge for horizontals.

I've also been thinking a lot about how to maintain a grip on a robot with the style of gripper WAI has I've finally settled on this design. 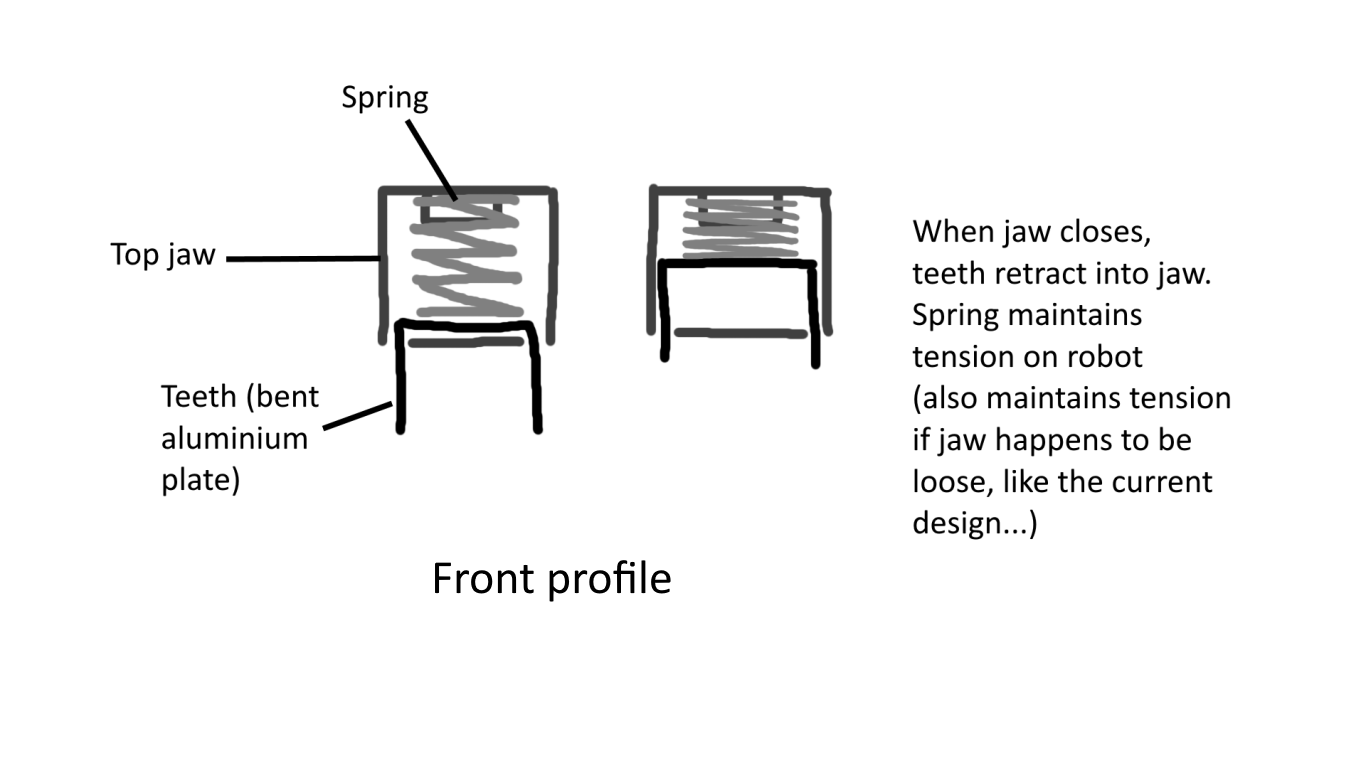 The idea is that there are springs which will keep the teeth pressing down. This lets me "overbite", so if there is slack in the jaw, grip should still be maintained. I've printed off a test jaw and bought some springs, then found the springs were far too strong and bending the bottom of the jaw out! So I've got (hopefully) weaker springs on order.
Thomas

get a hammer and a small punch or a nail to make a small dent into the alu where you plan to drill... this is a good way to prevent the drill wandering...
Team Rocket
Esper(4wd flipper)
Mantis (4wd grab 'n' lift)
Dominus (Vert SPINNAAH)
Beatus and Defeatus, haha yeah man, you mad?(4wd cluster)
Remembering Rex (antweight cassius)
Fennec (4wd flea) current world champion
Top

I'll second Kyro's advice there... Otherwise what drillbit are you using? I've found the dremel own brand ones too be lackluster and I use cobalt drillbits I bought from a toolstation. They wander less.

I'll advise against a dremel workstation though. The construction on them is not super rigid, and I found with mine that the play in the press allows for crazy wander
Last edited by LimaHotel on Mon Sep 09, 2019 7:45 pm, edited 2 times in total.
Jiggy Sawdust
Jammin' Good with Weird and Flippy
The Pushbot from Mars
Top

I'm using the Dremel brand ones that came with my Dremel.

I've actually found that the 1mm 6082 is soft enough for me to just put the drill bit into my pin vice and hand drill the hole. Much more accurate.

I picked up some clamps and two pieces of steel to bend the aluminium on a new shield which wraps around the sides to remove the possibility of a horizontal catching the inside face of the shield.
Thomas 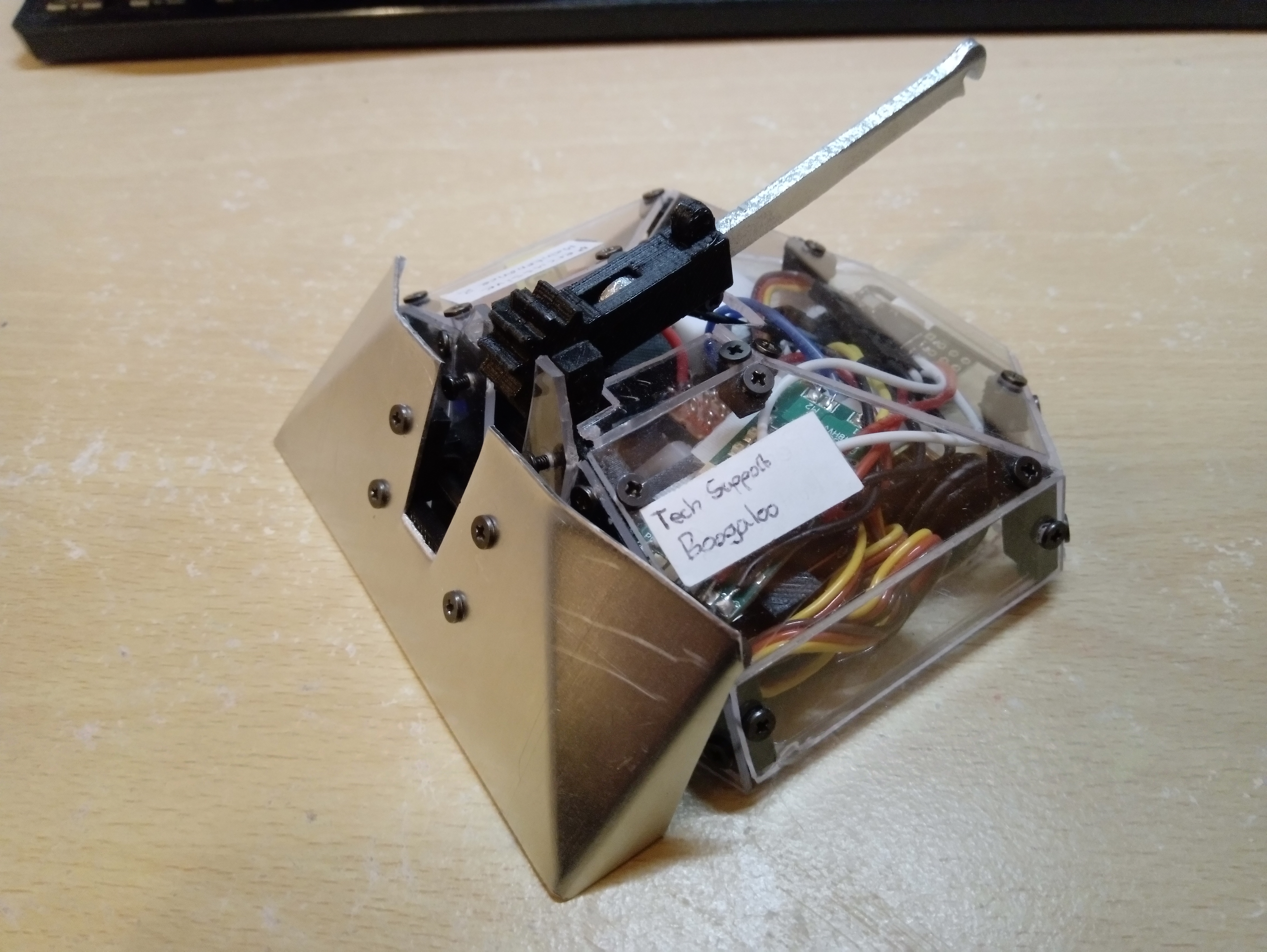 Here is the shield at default position. 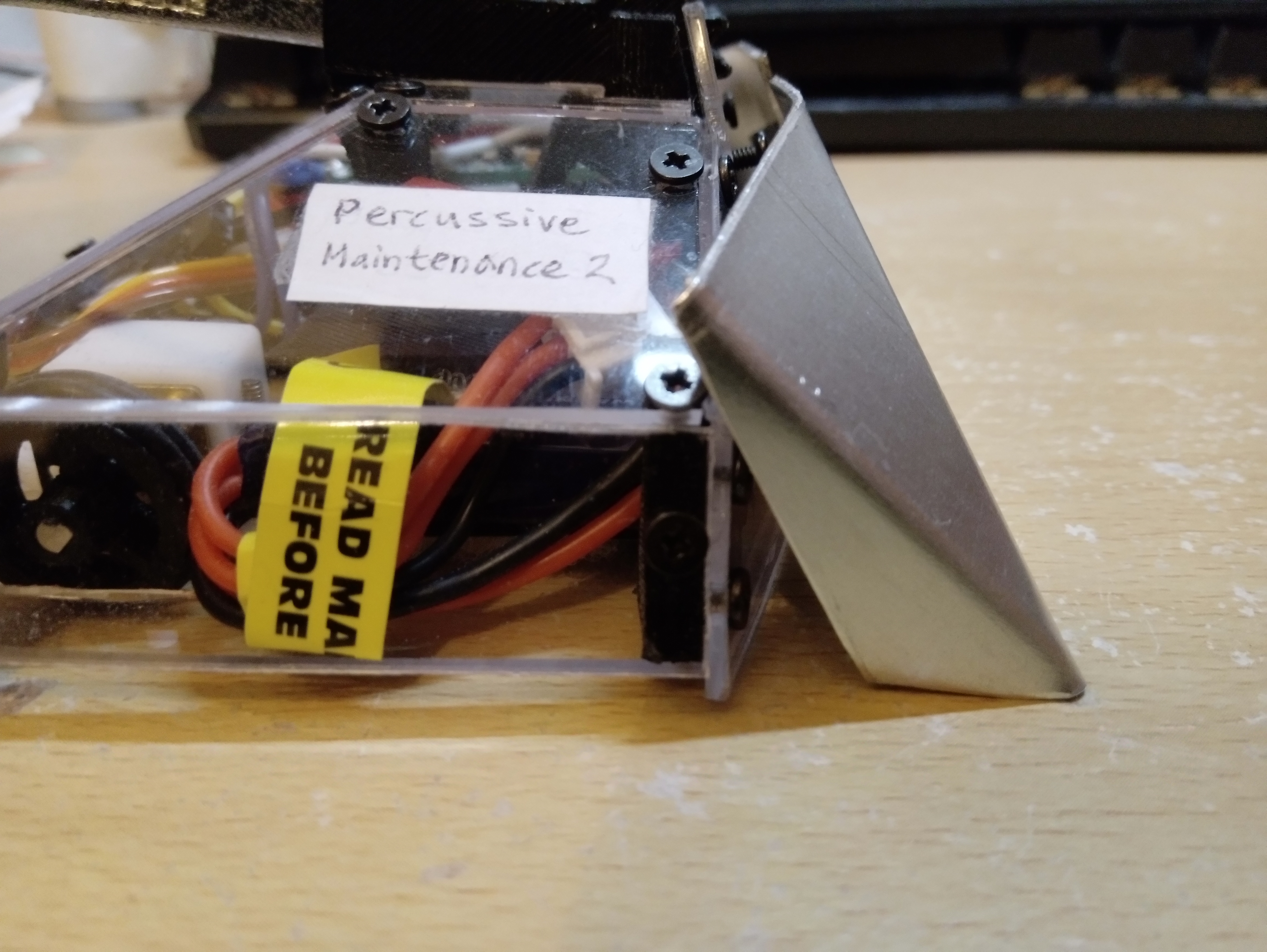 Here it is when fully hinged down. 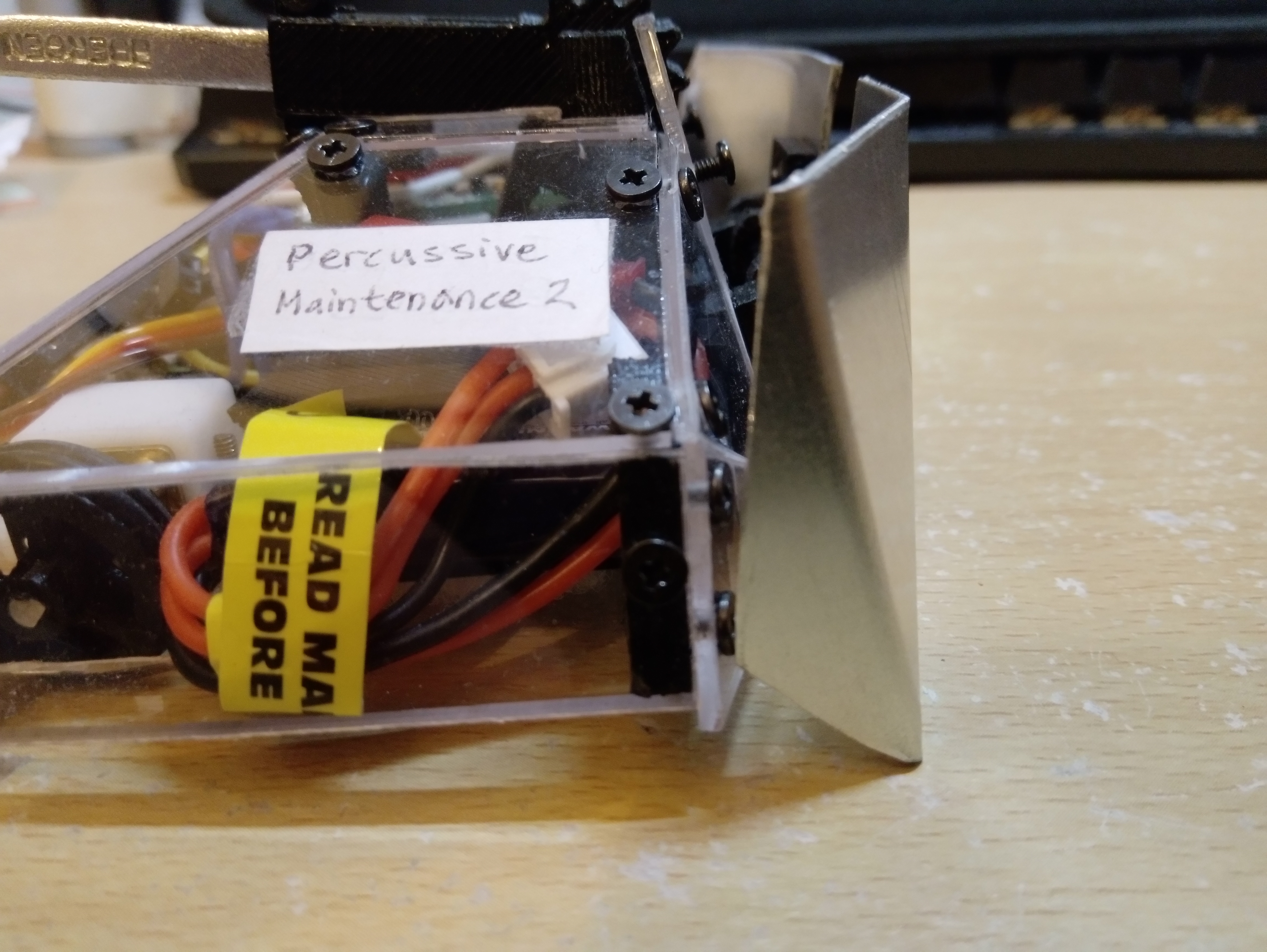 I still have enough ground clearance at the back that I can reverse off the shield. It seems to work well in stopping robots without acetate from getting underneath, acetate still wins though.
Thomas

Ants:
Percussive Maintenance 2: Tech Support Boogaloo
Have You Tried Turning It Off and On Again?
It's Not a Bug, It's a Feature!
Working As Intended
Error 404 - Robot Name Not Found
Top
Post Reply
172 posts