Suspicious Humous won best robot name of the day for me

I liked the spikes. At one point it looked as you had a spike jabbed in underneath an enemy flipper. Pretty cool.
My robots:

We should organise a secret ballot where each team gets a vote on "best robot name", and can vote for as many as they want (but not their own).

Yes, Suspicious Houmous is a good one.

yeah, that was exactly what I'd hoped to do.

i like to think that if the lifters could've lifted, I'd have lifted him up at that point, and gracefully dropped him over the edge of the pit like a pro.

ah well, there will be a next time. can't wait to lose again!

i like the name competition idea, although i think a best looking robot would be good too. my son liked diotant the best, and i liked bramble. as for names.. "I’m Going To Hit Your Face, With My Face" made me laugh, so I'd vote for that.

Did it have "This is hardox" written on its front scoop? At least in one fight against a brutal spinner?
Robots: Betsie - RaspberryPi controlled flipper bot with gyro stablisation - too clever for her own good?
Stacie - tidy flipper; 4wd driven by hair bands
Top

yep, although something made me think it may have been a bit of a fib. :p
Team BLEEP Suspicious Houmous / Sprouting Potato / Fermented Melon / Black Carrot
Top

last night, the araldite on the lifter motor hardened, so i thought I'd see what it could do.

unfortunately, it was not to be. something has gone a bit wrong..

it seems like the motors are randomly pulsing back and forth. the erratic circular motion might be due to one of the motors having a faster reaction time than the other - it's hard to say. maybe it'd just go back and forth if they were identical.

this time i stripped it down to just the battery, esc, and motors, with the bind plug in and the tx off. it's pretty weird - it was working at AWS 55 after the fights. i guess it's either the ESC or one of the motors causing some weird feedback effect. maybe a metallic fragment has got in somewhere

Last night, I finally got around to testing Suspicious Houmous's lifters in their glued state, and, as is usual in my roboteering journey, things didn’t go to plan.

As I couldn’t use the NanoTwo’s RX (need to get some compressed air to try and clean it), I attached a servo tester to the Vex 29, using a bucophedon as a BEC. My phone weighs 143g, so I plonked it across the lifters and slowly raised them..

The bot tipped itself forwards.

Nadgers! Probably not an issue in combat, with the wheels driving the bot forward, against an opponent with a less dense weight distribution, and not trying to actually lift them. Next, I tried holding the bot down..

The internals flexed and the gears juddered about without lifting.

Nadgers! I knew I should’ve given the lifters proper mounts, but I was worried about weight. At least the araldite held.

It got me wondering if my idea was rubbish, so I looked up what kinds of lifters were in Robot Wars. Surprisingly few like mine, it turns out. Closest is a US competitor called Probophobia, which is so similar that I’d almost question whether I copied it or not. Except I’ve never seen US robot wars, so I don’t think I did. I’ll interrogate myself further, later.

A redesign is certainly in order.. it might wind up looking totally different, as having the lifters go 360 degrees seems a little pointless on an invertible bot. Is it okay to use the same robot name, even if the robot changes a lot? It’ll still be a lifter!

The next event I'm going to is BotFest at the end of the month, and I've got two bots registered that don't currently exist (Suspicious Houmous has now been dismantled). I'd better crack on!

oh, man.. the AWS 55 video is up on youtube (https://youtu.be/CYe_PA5pmVA), and my fights were worse than I remember.

First one is at 12m3s, and you can see me getting stuck on the spikes almost immediately (looks like it might've saved me from instant death, tho) as I got mixed up. Then I got the spikes up and thought they might be able to snag the mini pig trail, but obviously got pushed into the pit for that, because that's what I'm meant to fall for.

Second fight is at 1h10m9s, which I had thought didn't go too badly, but it looks like it did. Wheelspinning all over the place, getting mixed up when flipped, then feeding myself into the flipper. No wonder I lost traction - I was in a bot! *insert houmous-eating joke here*

At the moment I'm pondering the next robots. Axe placement on Fermented Melon is tricky, but I'll get there. I want to make a 4wd rambot out of hollowed/layered HDPE (Sprouting Potato), and I think the next iteration for Suspicious Houmous might be a wedge-ish shaped lifter using the big orange wheels that I mentioned earlier on in my posts. It may wind up looking a lot like Tik-Tok, but that's no bad thing - that robot was ace!
Team BLEEP Suspicious Houmous / Sprouting Potato / Fermented Melon / Black Carrot
Top

RIGHT! That's IT! I'm gonna buy a ruddy 3D printer, and be done with my inept fabrication skills getting in the way of my imagination.

I've got until the end of the month to sell up stuff from my previous hobby splurges (lots of retro MTB stuff, and a modded Commodore Amiga A600), and to convince the wife (who's already fed up of me sitting on the sofa whittling plastic).

So, I'm thinking that a Wanhao i3 Mini seems to be the best bet. Cheap, small, and a known brand.
(edit: ignore that - it can't do ABS fanx to an unheated bed. An Ender 2 or 3 might be better.. still looking and learning)

I used to be good with 3DS Max, and Imagine 2.0 on the Amiga before that, so hopefully I can design something meaningful with Sketchup or summat (altho it seems awful from a momentary dabble). Should be.. interesting!

gawd - not long to go before Sunday and the Botfest! I entered (the now dismantled) Suspicious Houmous and the unbuilt Sprouting Potato.

Sprouting Potato was supposed to be easy.. a 4wd pusher/rambot. Initially I designed it to use two motors linked to the wheels using gears to get 4wd, but changed my mind after realising the mechanism weighed as much as the extra motors. 4 motors should be even easier! 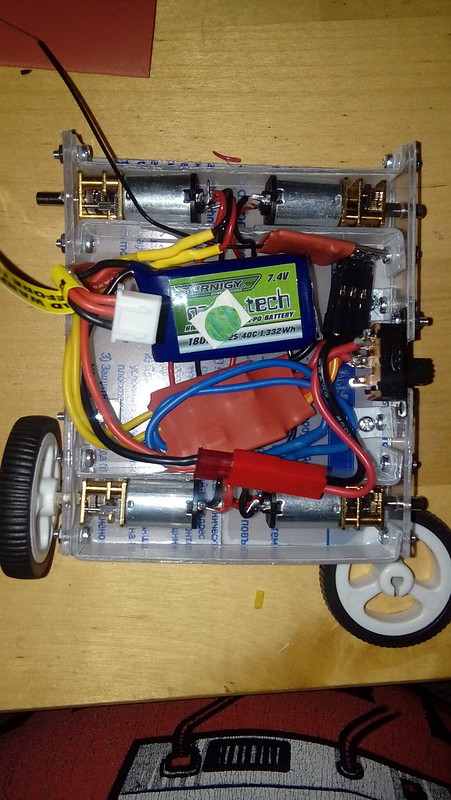 oh, why can't I just keep things simple? Instead of making a roomy brick on wheels, I made it the minimum height, and as short as I thought I could get it. Too short, it turned out. I forgot to take into account the switch and the battery wires - the same mistake I'd made with Suspicious Houmous!

It was close, though!

So, new plan thought up, using proper mounts on a big base plate. I reckon I can finish it tonight, as the new plan is simpler.

As for Suspicious Houmous.. I have no idea! It'd be tempting to reassemble it with a couple of minor modifications to improve the lifter, but the NanoTwo is apparently toast (I suspect it's the RX), and a DasMikro won't fit in it.

Maybe I'll try removing the RX module, and see if I can get it going with a different one. Luckily, I already have a spare!
Team BLEEP Suspicious Houmous / Sprouting Potato / Fermented Melon / Black Carrot
Top
Post Reply
124 posts