Looking good there, neater than my Ants at any rate

it always seems to go wrong. think i need to get some kind of pillar drill.

I picked up a pillar drill that uses a standard corded drill and simply guides it down for about £20. I need to get a clamp to hold the pieces down whilst operating the drill and the pillar arm but it definitely helps with drilling straight down.
Team Kaizen

haha - thanks. You're definitely far too kind.

Thanks for the advice - I'd forgotten about egg beater drills! Definitely need one of those. I bought a hand drill from Aldi over the weekend, which made things a lot better, but it can only cope with bits up to 2.5mm (I've ordered a better one). Good for drilling pilot holes, but that was a late realisation after a few failed attempts. I'd made a lot of those before buying that drill, so the bot is a lot shonkier than it looks!

Another thing is that the bot was originally supposed to be a plain box shape, but I wanted to see if I could make it out of two U-shaped bits of 1.5mm polycarb. The answer is no; I couldn't get it to bend much further than 45 degrees.

I was going to scrap the plastic, but had the idea of bending it again, and it's definitely better looking than a box! I couldn't remember where I'd bent it, though, so the bottom and sides don't fit together very well, and the change in shape meant a lot of hole placements had to change, and internals moved about.
Team BLEEP Suspicious Houmous / Sprouting Potato / Fermented Melon / Black Carrot
Top

It definitely doesn't look as bad as you seem to think it does! Looking forward to seeing it go.
Dave
Die Gracefully Robotics - Barely Even a Proper Team.
Top

Must be my l33t photography skillz!

I admit that stuff isn't too far off, but it's enough to make it undrivable. The motor mounts were the first things I drilled, so the motors don't line up, and one motor sits higher than the other because the chassis is bent due to the spacer holes not being lined up.

Speaking of bending, I turned my attention to Fermented Melon last night. I'd been putting it off because I suspected I needed more practice before attaching the curved rear section, and I reckon I was sort of right - if I'd tried it with the dremel it would've been a mess. Lots of sellotape and some hand drilling later, and this is how it looks: 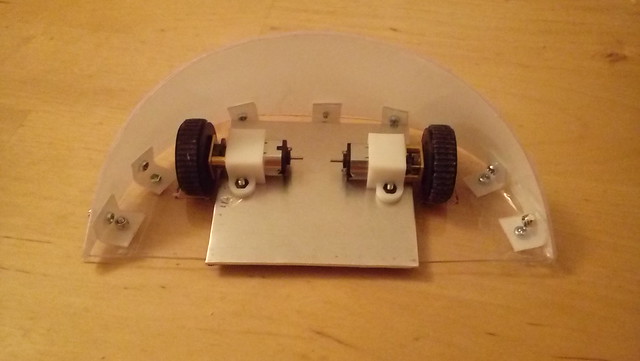 The curved polycarb is under quite a bit of tension at the moment, so a breath from a passing sparrow will probably cause it to explode catastrophically. I might have a go at worrying it into a more permanent curl tonight. Weirdly, the motors are quite well lined up, considering I drilled them before I started on Suspicious Houmous. Not sure how I managed that!

It's gonna be a front flipper, I think. The parts seem to fit, but it's tight, and I'm not sure how much of a flip it'll have. It may turn out to be just a wedge with a big flappy srimech, but at least it'll be melon-shaped, and that's the important thing.

It's an impressive curve. Curves are hard! Especially with the 4" cube rule.

I really hope you are at least getting a small sense of pride from your builds. They are great - different and full of personality.
Dave
Die Gracefully Robotics - Barely Even a Proper Team.
Top

That curve looks really good! Quite a unique design.
Thomas

Ants:
Percussive Maintenance 2: Tech Support Boogaloo
Have You Tried Turning It Off and On Again?
Error 404 - Robot Name Not Found
It's Not a Bug, It's a Feature!
Working As Intended
Top

I didn't cut it out very well, so it's a bit iffy (first time using anti-clockwise tin snips). Can't tell from looking at it, tho.

It's all going well, but I've got a question for more learned roboteers: The main body easily fits on the bottom of the box, and with 85mm spikes pointing forward, it fits diagonally, but if it sits on the bottom and angles the spikes into the corner then they can be an extra 20mm long. I think it's allowed, as they're moved mechanically, but I thought I'd better check.

I guess it'd have to start every match with the spikes pointing skyward, but that's no bad thing because it'd look awesome as a result. 8) . I'm quite looking forward to finding out what kind of gymnastics it can get up to, too..
Team BLEEP Suspicious Houmous / Sprouting Potato / Fermented Melon / Black Carrot
Top

Yup, you are correct, it's absolutely fine as long as the spikes start in the position they fit in the cube in.
Dave
Die Gracefully Robotics - Barely Even a Proper Team.
Top