With the new setup I was able to get the heads adjusted to the same height and now finally managed to print nylon supported by HIPS.
The nylon item lifted off the table leaving the HIPS support structure in place and a really smooth finish on the supported surface.

This has proved to be quite a difficult task but enjoyable in its own way but now I can get back to building robots although there is still the ceramic heat break head to finish.
Top

May have been a bit premature with the celebrations I just tried printing a more representative test and it all went horribly wrong.

It appears that the all metal head keeps jamming on longer runs when printing PLA and HIPS but is fine with ABS and Nylon.
Also when the supported nylon part has holes and shaping it still fails to adhere to the HIPS enough to print properly.
I have reverted to the PTFE insert heat break tube for the support head as they are all below 245C and that seems to have fixed the first problem.
As to the second I am going to try some different support materials to see if they are any better.
Top

Yeah once I had an all metal hotend I stopped doing PLA for that reason. MUCH more prone to jamming than higher temp filaments.
Nuts And Bots - For all your components and ready built antweights!

Thanks for the confirmation it always helps to know it is not just something that I am doing.
Top

Reading on the internet it appears supporting nylon is generally a problem as nylon doesn't stick to much other than itself.
I have tried using the same nylon as a support on the I3 but at the temperatures needed to give good inter layer bonding it is difficult to separate the model from the support.
To get the nylon to stick to the glass table I use a PVA glue stick so that suggested that nylon should stick to PVA plastic so I ordered a sample of Kai Parthy HIGH-T-LAY which is a PVA based water soluble support material. While waiting for that to arrive I thought I would try using a slightly different nylon as a support material. I had noticed that at lower temperatures the nylon loses its inter layer bonding so I ran with Taulman t-glase nylon as the support structure at 230 C and the Alloy 910 Nylon for the model at 260 C.
This actually worked quite well and I was able to separate the two parts reasonably easily.
The PVA material arrived today and that worked better giving a really good bond to the nylon and a good finish.
The dissolving in water wasn't as quick as I had hoped but after about 30 mins in fairly hot tap water it all softened enough to clean out quite well but longer soaking would probably be better.
Below you can see the two parts produced the one on the left being the one using nylon and the other the PVA.

I think the PVA is the best option especially in hard to reach places but like the nylon the PVA is prone to moisture uptake and as the sample had been out of its sealed bag for some time there was a lot of moisture boiling off during the print process.
I stuck some of it in my oven for about an hour but seem to have over done it a little at it has gone a bit brittle so I I am leaving it out to see if it softens up a bit as it reabsorbs moisture.
Top

The PVA plastic doesn't seem to softening up much so I have been looking for a better way to dry it out.
The problem is the oven I got is 100 C minimum so not really suitable but I have found a range of products that look much better.
Instead of searching for ovens I looked for dryers and found there are a range of fruit / food dehydrators that look ideal.
They are thermostatically controlled between 35 C and 70 C and mostly being round and a bout 30 cm diameter are ideal for lengths of filament taken off the spool.
I have ordered one of these and will let you know how I get on.
http://www.ebay.co.uk/itm/201363508426? ... EBIDX%3AIT
Some what unrelated but a real fun looking item is a 3D printer spool holder on thingiverse.
http://www.thingiverse.com/thing:1234760
Top

I have for about a year and a half been drooling over documentation and video's of the Sigma BCN3D printer and quietly saving up my pocket money as they are a rather pricey £2400. Yesterday while checking out their UK distributor Hawk3D for about the 50th time I saw the were having a closing down sale and the printer was offered at £681 off so I finally bought one. There are at the moment 2 left if any one is interested its main advantage is that it has two independent extruders the one not in use is parked to the side so you don't get it dribbling on the work. It arrived today and in around an hour I got it up and running and calibrated and so far it is looking good. I do some testing and let you know how I get on.
Top

It has taken a little while to get it all up and running as the version of Cura modified for use with this printer is version 2 and it has taken me a while to work my way through it. I still haven't got it working properly via the USB port but I am gradually coming round to the idea of using the SD card that seems to be the norm. On my old PC when you made the SD card safe to remove you had to reboot the PC to get the card reader working again which made it very difficult to use. That doesn't happen on my latest PC and with Cura 2 if you have the SD card plugged into the PC it defaults to saving the G-code to that disk and even allows the making safe with a single button press. The quality of printing particularly with Nylon is considerably enhanced and the final print is noticeably more dense, stiffer and slightly heavier.
See chassis below of my current design project new printer / Prusa i3 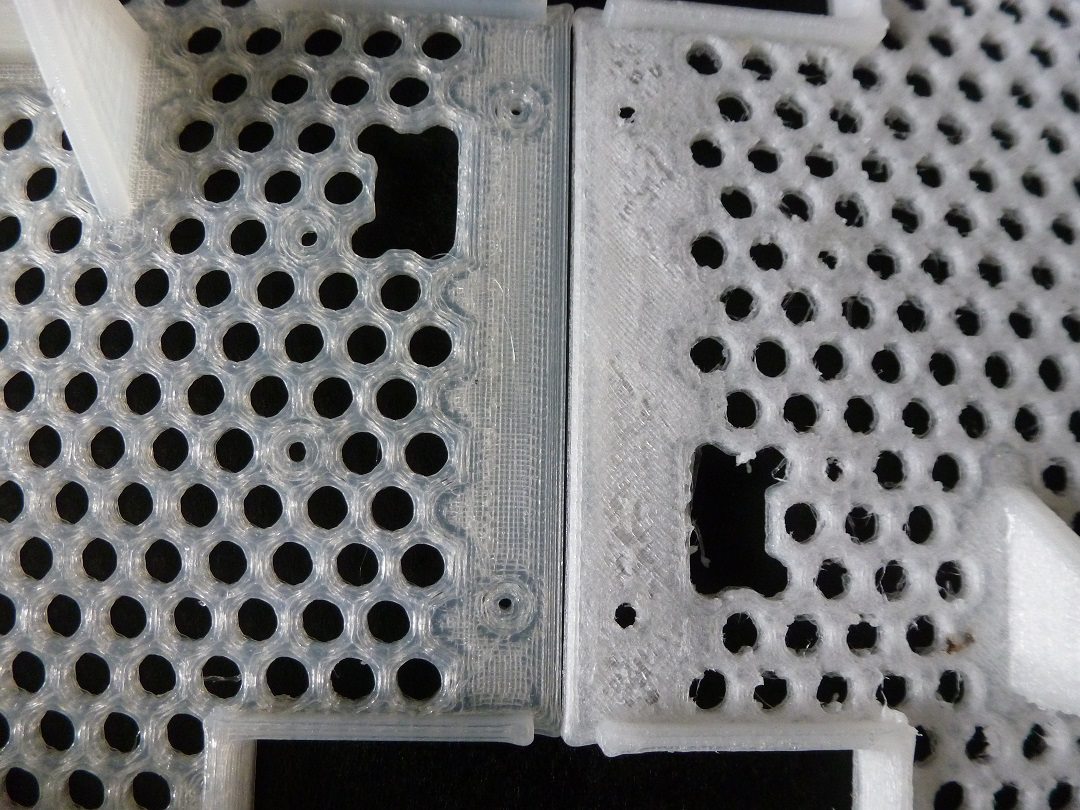 So far the only dual head print I have done was an alignment target they supply with the machine and that came out well all be it in PLA.

Awesome with the dual extruders, i guess you will load one with PLA for a nice melt away support?
The print on the right looks like the flow rate may be a little high?

I know your problem with Cura, for fdm im running an ultimaker which also only wants files through the SD card. Good luck with the next prints

Looks great Pete. Looking forward to seeing your new machines printed with this.