Some progress made, but mainly in fiddling with Sketchup. I've been experimenting with wheels, and I think I now have a hub that can take a 30.4mm lego tyre. Took a while to get the 'D' right, and I've yet to print it. It may not end as planned.

Speaking of which, I gave ABS a quick try.. 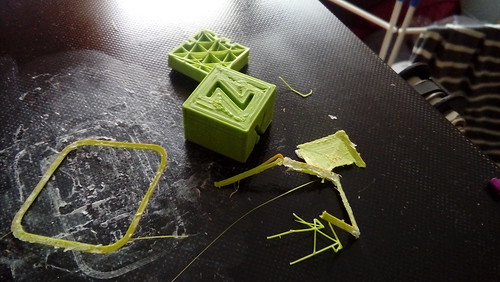 99 problems but adhesion ain't one - it broke in half when I tried to remove it (partially due to poor layer adhesion).

ooh, I have another idea for the list - this one's a grabber, using a motor and toothed rails to extend/retract a pair of arms. Compared to some of my other ideas, it's pretty simple, so i might give it a go! 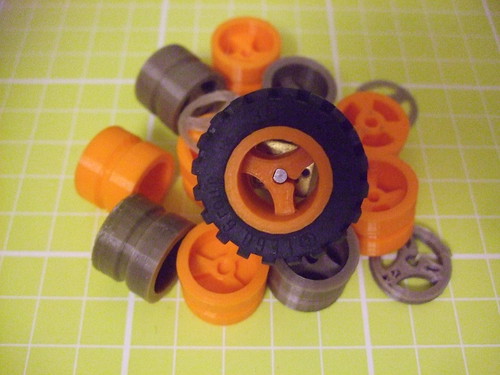 I finally produced a version of wheel that I'm happy with. It took quite a few iterations, often because Sketchup behaved in an unexpected manner, but it's all part of the learning process. I think I might have to switch modelling software.

It's quite a wide wheel, but it fits the Lego caterpillar tracks, and has a few different tyre options. I'm gonna use what I've learned to make a couple of smaller Lego-ish wheels, and then I can design my bots around them.

Those look some really good hubs. That is a fine bit of sketchup work there
Team 1202

Cool, where have you got your Lego wheels from??
Top

My son has literally hundreds of wheels in his Lego stockpile, so I'm using his stuff at the moment.

He only had one set of tracks, tho, so I bought some from bricklink. it's also useful as a reference, as it shows which tyres fit with which wheels (and vice versa). gotta watch for postage, tho.
Team BLEEP Suspicious Houmous / Sprouting Potato / Fermented Melon / Black Carrot
Top

I put the STL of the wheel on thingiverse, if anyone's interested: https://www.thingiverse.com/thing:3247013

I just hope it works for other people, should anyone try it. I do worry that it only works for me because my printer's badly set up.

edit: and a much smaller one that fits a tyre from a Lego motorbike: https://www.thingiverse.com/thing:3247646
Team BLEEP Suspicious Houmous / Sprouting Potato / Fermented Melon / Black Carrot
Top

So, now that I've mastered SketchUp (

), I thought I'd have a go at using it to plan Fermented Melon. Nothing too fancy, as it's gonna be mostly made from polycarb. I just wanted to see how everything fits before cutting up some card: 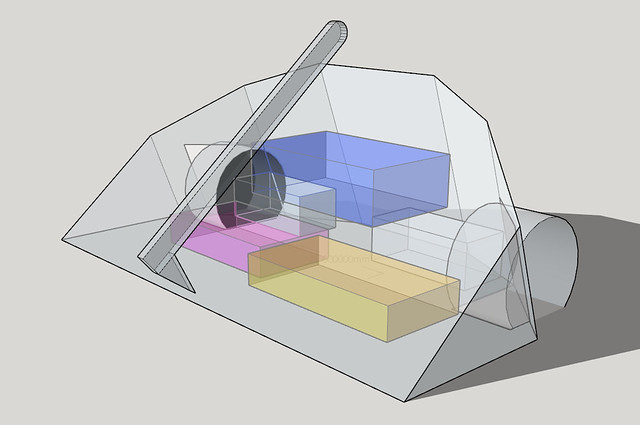 No weapon mechanism, yet, as I haven't decided what to do. I could just stick a motor on top (the yellow block is a Vex 29), or I could use gears or a belt.. I want the axe to hinge at the peak of the bot, so it can hit forwards as well as backwards. It'll also probably use a nail or something.

I've just noticed how much weight is concentrated at the back of the bot. I'm sure it'll be fine!

Not much progress, as usual. I don't get enough spare time.

It doesn't stop me thinking, tho, and this week I have mostly been thinking 'torque reaction'! I thought it might work for Fermented Melon, with the battery and ESC in the wedge, and the drive and axe kept in place with bearings, but I think it'd disrupt its melony goodness, so I'm gonna build one for a cluster! 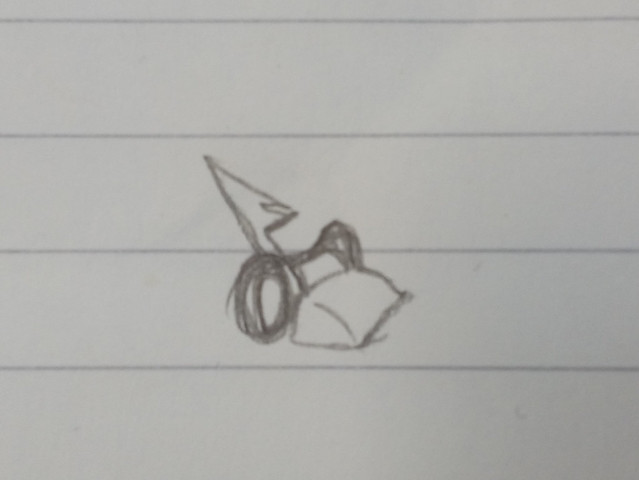 Initially influenced by Ninja from TIFR, then even more so by Overkill when I found out what Ninja was based on! (I've never watched old Battlebots.

) My initial idea was to use a kitchen knife with the handle removed, so it already has bolt holes, but I think an axe might be better.

Preliminary cluster name: Lemon & Slime. Not sure what the other bot's gonna be yet, but my son has to drive it, and he just drives in circles, so maybe a body spinner.

I'm also doing some experiments to see if the tin can lifter is feasible, and if my original idea for Suspicious Houmous is doable. It was never meant to be a lifter with proper arms - it was gonna have panels that (in theory) get under the opponent and rotate to pick it up off of the floor: 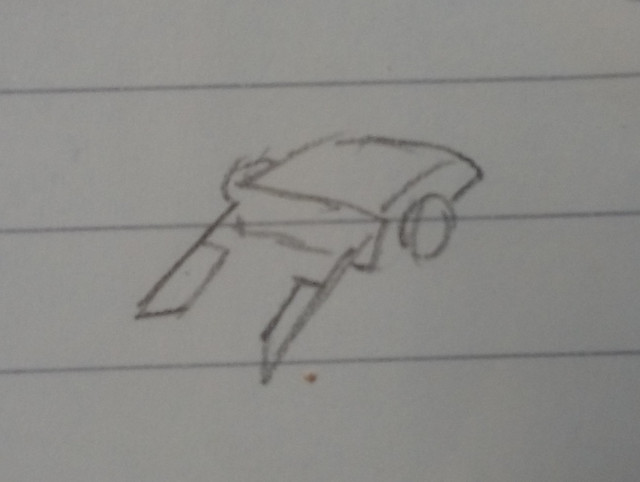 I couldn't work out how to attach the panels, or how to get them into a position that would get under anything. I've now worked out how to get them low, so now I need to see how strong they are when soldered to a rod. I'm guessing not very.

actual progress! I'm still working on it, but here's how sprouting potato is looking at the moment: 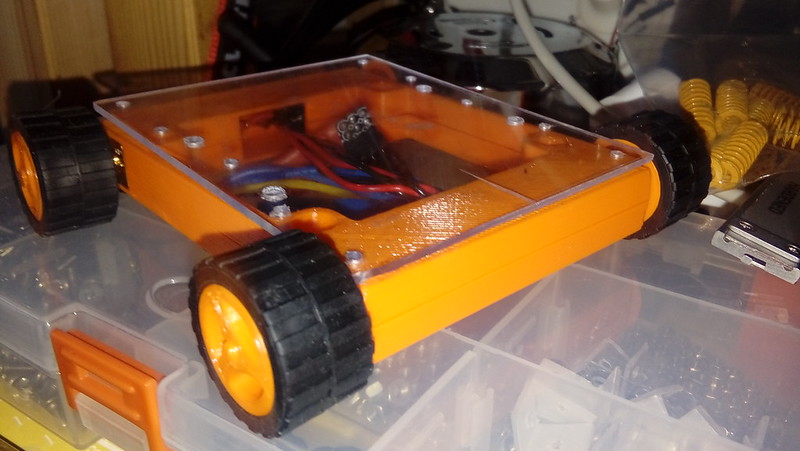 the orange pla is just for testing the shape. it'll either be semi transparent or purple, depending on if i can get abs printing in time. there'll also be a lot of refinements, like a wedge, and properly cut polycarb, and LEDs. still not sure about the dimensions, either.

at least I'll have something for February!

edit: gah! an experiment with PETG has temporarily borked my 3D printer. I need to concentrate on getting Fermented Melon done, so this might be the final version, with no spares!

First, I printed the bot out on paper, using Blender and a papercraft plugin. I soon realised that I'd made a mistake - I'd forgotten to add motor brackets, so the motors were too close to the shell. A few snips later, and all was fine, so I sellotaped the paper to some polycarb and cut it out properly: 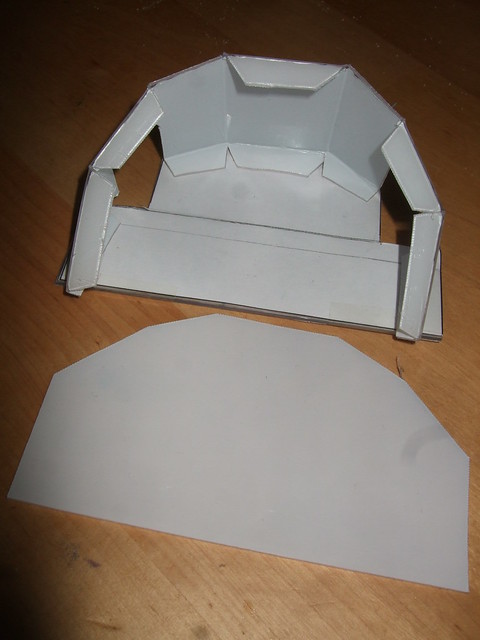 I wanted to try using tabs to connect the parts together, but my bending skills are lacking, and they look a little rubbish. They might look better once painted, or if I cover them with a layer of melon-looking paper. I also need to add some kind of access panel, as there's no way of accessing the internals, which is gonna make things rather tricky!