erm.. that new plan for Sprouting Potato i mentioned.. well, i made it at work, without the original to look at..

the space for components was identical!

even the base plate was the exact same size. i thought I'd left loads of room, too. d'oh!

with a bit of rearranging, changing wire lengths, and removing the switch, i got it all to fit. having the same base turned out to be handy, as I could reuse it. 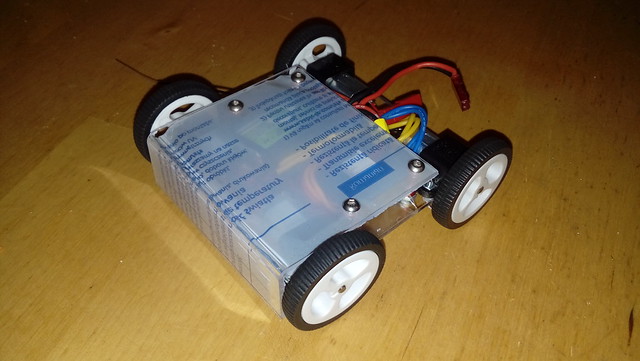 i still need to add side panels and some screws on the front, but it's pretty much done. it's only 119g at the moment, too.

it was quite liberating to have less panels to worry about!

i left the back exposed because i thought it'd save weight (originally, only the middle was covered, to keep everything in), but i don't think it needs to.

edit:
I feel like I reply too much (altho this is supposed to be a diary..), so I thought I'd just tack a small update onto this post. 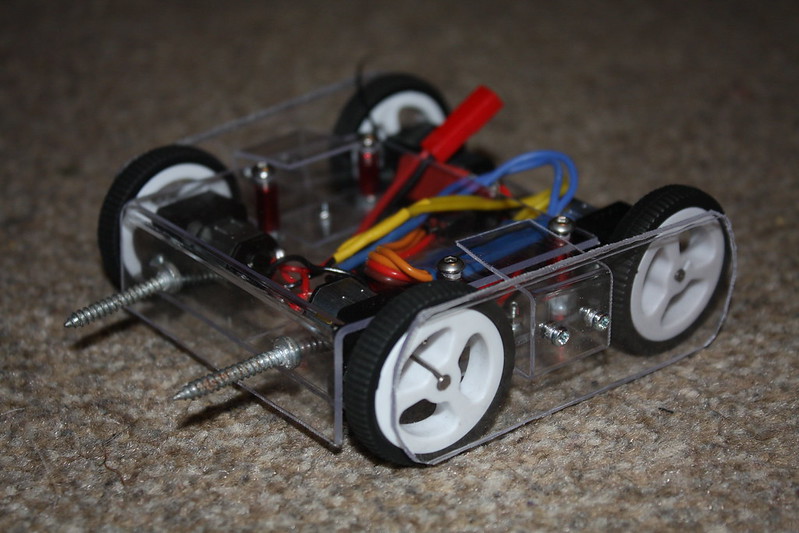 Just needs a bit of decorating!

oh, and the screws on the front need to be fixed properly, somehow - they're a little loose. I think I'll put them through some HDPE on the inside of the polycarb, which will also act like a bumper.
Team BLEEP Suspicious Houmous / Sprouting Potato / Fermented Melon / Black Carrot
Top

.. and now for Suspicious Houmous!

The bot still exists, in bits, but those bits are too flimsy for lifting purposes. The lifting mechanism was interesting to make, but also not quite up to lifting accurately, and the axle used up so much room!

So, new plan: Two nights to do it in. I've got all the parts. What could possibly go wrong?

So, I got nothing at all done on Friday night. It's the only day of the week where there's anything on telly, so it's the day I always spend vegging on the sofa with the wife, the cat, and a few cans of Guinness.

So that left two mornings and an evening. I created the shell between 9am and 11am, most of the soldering between 22:30 and 02:00, more soldering and tweaks between 10am and 12am on the Sunday, and out the door at 1pm! 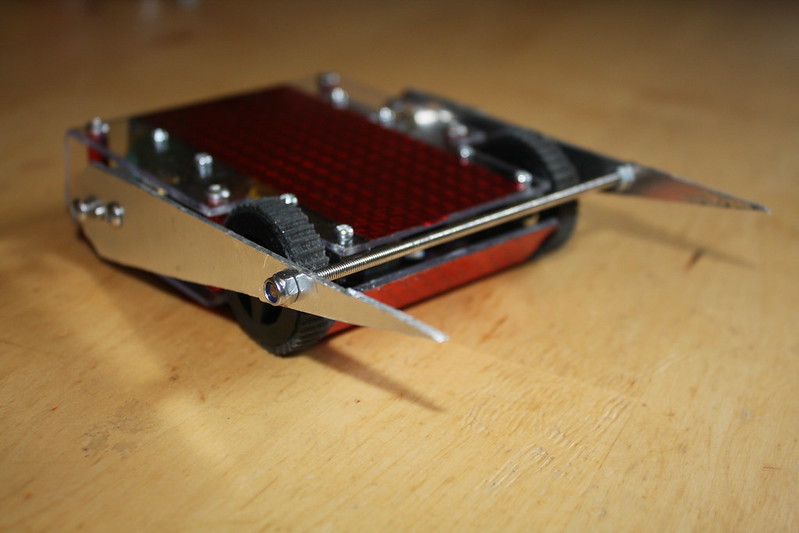 The power switch caused the most bother, ruining my plan for the bot to be 16mm high, and meaning I had to use 20mm standoffs to make everything fit. It didn't leave much for ground clearance, and it barely worked when driven the way it was supposed to (pictured), so I had to reverse the controls and drive it upside-down, even though it actually looks the right way up, as the motors are fixed to the roof.

It worked better than at AWS 55, losing two, but winning one! well.. one battle was best of three, so it technically lost 5 and won 2. Still some room for improvement, but it was much more fun! Sprouting Potato lost all 3 of its fights. It didn't do too well at pushing, but mostly it was just bad driving.

Right, I'll stop for a bit, now. I've been neglecting my Steam backlog!

Hey, the wife didn't kill me!

I haven't had much time to mess with the printer, what with taking a break from footling, and having a minor holiday and stuff, but I have had time to print a PLA test cube on BuildTak, and then two cubes yesterday on borosilicate glass. The first attempt worked really well, despite the bed being slightly bowed, but the attempts on glass were not so good.

First I just tried it without changing anything except the bed level. Weirdly, it seemed like it was even more bowed, but I persevered and started it going.. the first layer was a bit wonky, but it seemed to settle down a bit, so I went off to do my sons shower. When I returned, it was noodle time! It looked like the cube had moved, and the last quarter of the cube was a mess of filament (nice to see the structure inside the cube, tho)

For the second attempt on glass, I turned up the bed heat from 60 to 65 degrees and added some pritt stick glue to the area where it prints. I did it a bit too small, and the outer ring detached immediately, but the cube itself stayed put. Cool! Time to go play Valkyria Chronicles for a bit...

45 mins later, and the cube had completed! Well.. nearly. One corner had warped up by about 3mm. I thought PLA was supposed to be easy?

It seems that the warping was probably the extra temperature stopping it from cooling, and the pritt stick was probably enough on its own. There is still an issue with the bed level, though. After doing some more interweb searches, I plonked a steel rule on it, and checked the flatness of the bed. It didn't seem particularly bowed at all, yet the extruder distance was definitely gappier in the center.

Tonight I'm gonna check the frame is tight, as apparently there are some nuts on the bottom that are loosened for transit.

edit: Frame tightened (not much improvement), bed temp reduced back to 60 degrees, more pritt stick applied, and the prints are sticking so well that I slightly gouged the first print while trying to get it off of the bed. 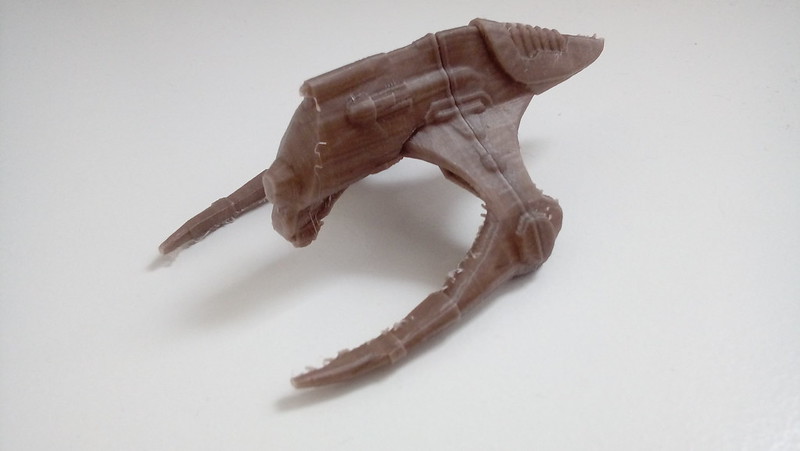 Obviously needs a bit of tidying.

It was pretty stringy, so I need to fine tune retraction a little bit. Looking good to me, tho!
Team BLEEP Suspicious Houmous / Sprouting Potato / Fermented Melon / Black Carrot
Top

I guess there is kinda news for this diary..

The stringing I mentioned was bad. I tried everything to try and get rid of it.. retraction, retraction speed, print temperature, print speed, coasting, various z-axis moves, extra cooling.. nothing worked! In the end, the only possible cause was damp PLA, so I bought a different brand (FilaPrint), and it worked first time! I dunno if I got a bad batch or what, but I'm not using MonsterFil again.

So, back to robots! Now that I've got the basics working on the printer, I can get down to designing and printing a 4wd system for Sprouting Potato (using 2 motors instead of 4), and working out some kind of axe mechanism for Fermented Melon. I can't decide on what type to use.. direct drive is the most obvious, but I want to hide the motor inside the main shell of the bot, so I'm thinking of something a bit more geared, or maybe even belt driven (probably not belt driven)

and, speaking of fermented melon, I've decided to build a beetleweight version of it!

this has kind've necessitated a team name change, as Antescher Assault Systems was a bit ant-specific, overly aggressive, and maybe just a teeeensy bit too retro. oh, and it's too long and tricky to spell. I was tempted to try an Amaurote reference to keep the Speccy theme going, but I imagined my son getting older and not approving, and came up with Team BLEEP instead.

aah.. all ideas and no build..

last night I was pondering Deadlock, and the way it looks like it rotates when it lifts (well, I thought it did), when I had an idea.

Imagine, if you will, a tin can (or plastic pot or summat) with the top and bottom removed, and a quarter of the circumference cut out. Now imagine it mounted on its side in a 2wd bot, so that the open section faces forward, and driven by a motor. There'd be a small wedge at the front, as a feeder.

Something less blurry and vague than.. 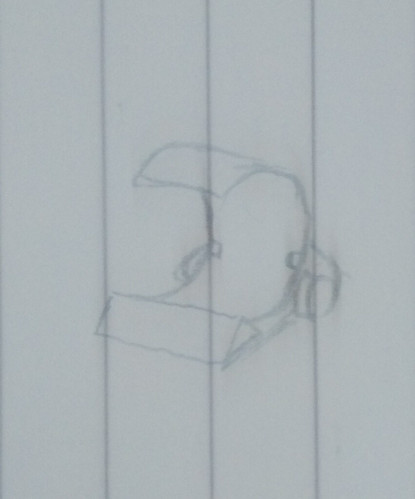 The idea would be to ram into bots so they end up at least partially inside the can, then the motor would rotate the can and hopefully pick the other bot up and into it (probably not completely, alas). With a few attachments, the can should also work as a self-righter, I think.

Chances of it working (I suspect my sense of scale is wrong) or driving properly are pretty much zero, but I feel like it's worth a try.

edit: I just worked it out with proper measurements and stuff, and it's looking a little dubious. As suspected, my imagination and reality are not in agreement.

The can has to be quite small to fit inside a 4" cube (pretty much the same diameter as a drink can), and the opening would be too small to do anything much. Cutting it in half might work, tho. Still lots of options to try out!

Oh man, I came on here to look for some newbie builds and feel good about my box-on-wheels, but your bots are really good!!

I love your updates and your bot designs! So many ideas I hope you get round to showing us!

Does nobody on here make rubbish bots that fall apart.....? haha.
Top

mine are pretty rubbish, tbh. my pushbot can't push, and my lifter can't really lift, and i expect my hammerbot won't be able to hammer, and my launcher will probably launch itself.. it's all good fun, tho!

a box on wheels sounds like a good place to start. i made life a bit difficult for myself, really.

Suspicious Houmous is not dead! I was gonna sideline it in favour of different bots, as I'd been having issues with it, but in the back of my head it feels wrong to ignore it. I mean.. it can do backflips across the arena! None of my other bot ideas can do that.

There's one fix I can make that solves quite a few problems. I'm kind've ashamed that I didn't spot it earlier - it needs wheels at both ends, mainly so that it'll have drive no matter where the spikes are. It should also make it a bit more controllable, although it won't stop me reversing into the pit.

I can't decide between tracks or wheels.. I'm planning it on paper while I'm in work, but drawing two wheels with a lifter between them just makes it look like i'm doodling crude pictures all over my notepad.

edit: I'm going for a mixture! 4 wheels, linked with bands within the diameter of the wheels (if that makes sense). I can't really link them with gears due to the lifter getting in the way.
Team BLEEP Suspicious Houmous / Sprouting Potato / Fermented Melon / Black Carrot
Top

I finally tried using Sketchup in anger, and this is the result: 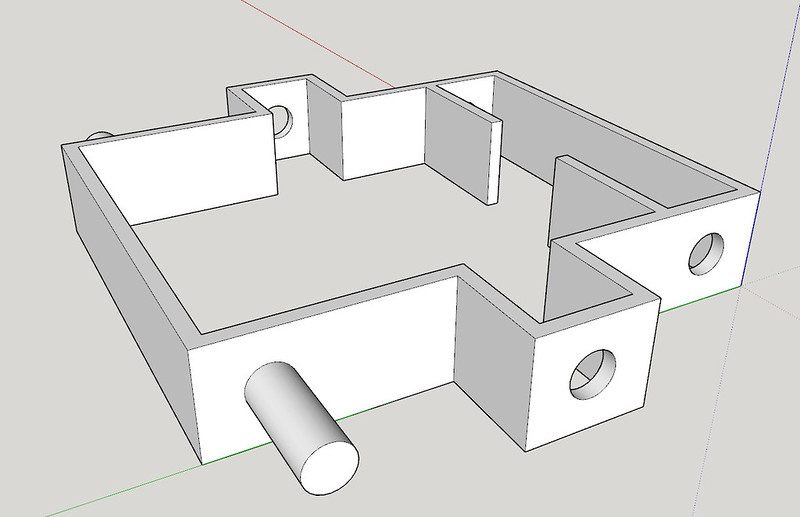 Not bad for a first attempt, I reckon.

The idea is to use the printed stuff to fix everything in place, and use polycarb for the top, bottom, and probably sides. I'm gonna try printing it out tomorrow, and then I can see if anything fits, and then make a more detailed model if it all fits in.

edit: Ha! As suspected, it didn't work out. I'd have gotten away with it, if it hadn't been for that pesky Vex29.. And the double-size axles (seems pressing '3' while making a circle creates a diameter of 6).. And the ruddy stupid way the wires come out of the LiPo.. The usual stuff.