Well, it's been a while since I posted - busy trying to get my head around 3-printing and Fusion 360 but I like to think the effort's been worth it. Finally got our two teams (mine and my son's) ready for AWS60. Found an AirBnB within 10 mins walk of the venue so we'll make a weekend of it.

Anthony's got one robot unchanged from the Open, one completely redesigned - and a new cluster.
The complete redesign (and his best hope for Saturday) is Recycler 3.

In terms of the evolution of this drum spinner, the first attempt, which came to Basingstoke and even managed a couple of lucky wins (before Avagadro 'did a number on him' and put us out of the competition). In my defence, Recycler 1 was the result of a last minute botch as I had to strip away most of the planned bodywork to reach the weight limit - and I never managed to balance the drum properly, causing lots of drive problems: 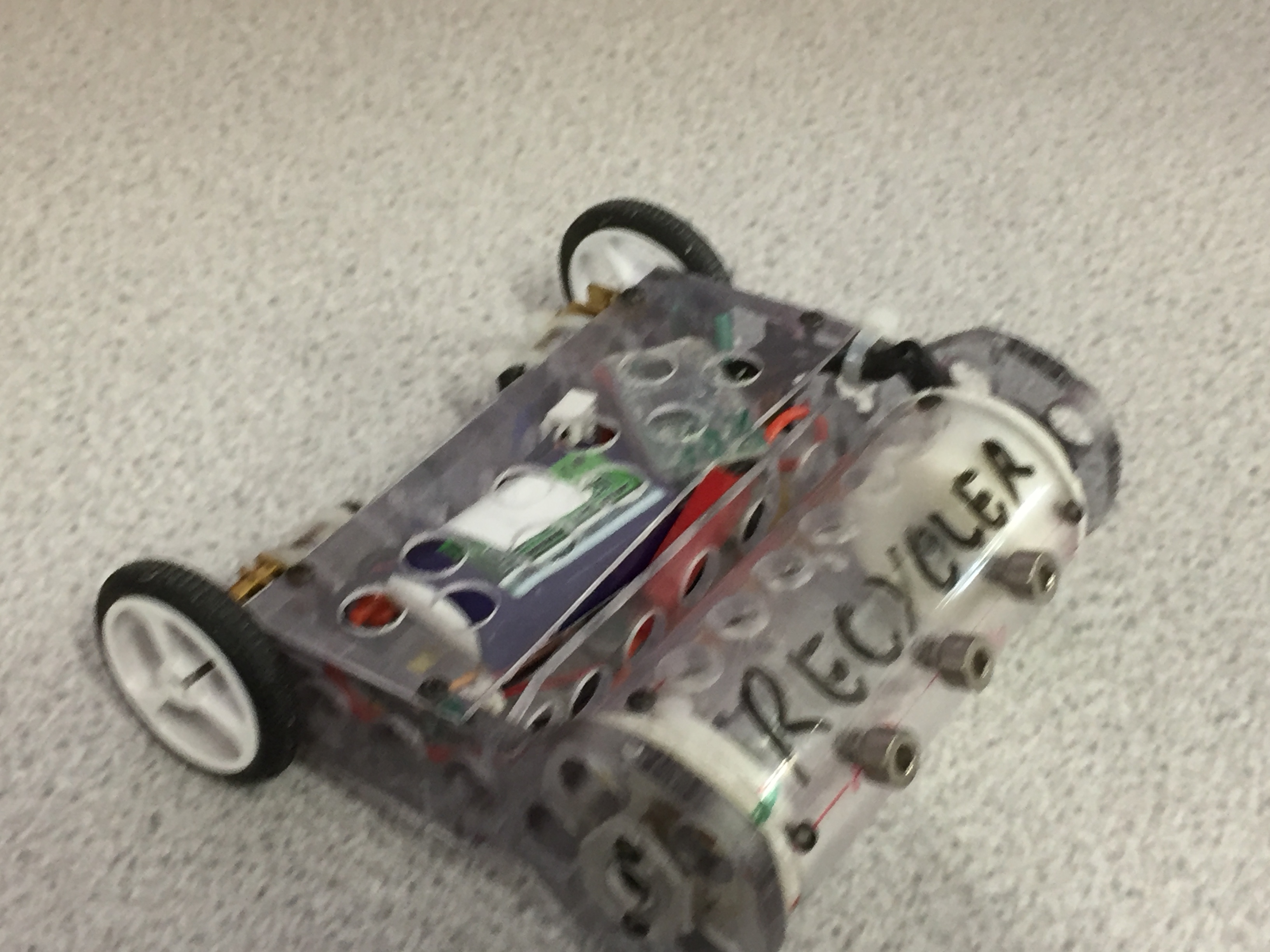 Recycler 2, who never made it to competition readiness, was my first attempt at a 3-d printed body and although I still like the aesthetics, I couldn't get the weight below 165g without too may compromises. Also still couldn't get that drum (polycarbonate tube with titanium cap-head screws) balanced right:

Which brings us to Recycler 3, who will be making his first appearance at AWS60. This time I admitted defeat vis a vis the polycarbonate tube drum and instead decided to print a drum core, into which I could insert blades cut (slowly and painfully) from 2mm Titanium. I've also beefed up the wheels and given them a bit of side protection. The Boudica's chariot projections either side are just m2 screws, which should snap off easily if struck but should reduce chance of getting stuck on it's side:

Very much looking forward to seeing this one in action as it's too dangerous to play with at home.
Incidentally, the blue printed bits are all done using some dirt cheap polycarbonate filament (£10 per kilo from HobbyKing). Nightmare to print with as it shrinks spectacularly but if you can design shapes where the warping isn't an issue then it's impressively tough.
Last edited by MySolderIsOlder on Wed Nov 27, 2019 5:02 pm, edited 1 time in total.
Stuart (Anthony's dad)
Top

Completely unchanged from Basingstoke (I've literally done nothing except recharge the battery and change the acetate) is Other Way Up - Anthony's 'bog-standard invertible pusher'. This one will have to take its chance in the lottery:

But the new kids on the block - and my personal favourite - are my first attempt at a cluster. Introducing "Maxi & Molly" (modeled on the family moggies):

Maxi (him on the right) is a simple pusher, powered by a 1-S 75mah cell and weighing in at a measly 55g. Deliberately made him first so I'd know how much weight I had left to play with for Molly. She's a 95g flipper with a surprising amount of strength (thanks to the little Inservos D0474HT 7.3g servo). Unfortunately the servo boards I used for Molly's ESCs are the kind that generate a steady 0.3v in the dead band - so unlike her namesake she has trouble sitting still! Too late to change now so I'll just have to hope she can calm down enough to avoid disqualification. Maybe some bluetack,,,

Really enjoyed the discipline of designing a cluster. It's like a haiku - the extra constraints are a real creative challenge. Too late for AWS 60 but I think for the next project I may try to do a 3-bot cluster. Maxi's a bit too wide to be a flea but have just got hold of some N10s, which are about 4mms shorter than an N20 so Maxi's fleas are a possible for AWS 61.
Stuart (Anthony's dad)
Top

As for my own ants, "Try Again, Flail Again, Flail Better..." (it's from Samuel Beckett's "Worstwards Ho!", in case anyone was wondering) has had one massive upgrade in that the insulating tape that I was using to close the battery compartment has been replaced with Gaffer tape. Well, I had a bit of weight allowance left so why not? This one will be my wildcard entrant - it's got a certain entertainment value but pretty useless in combat, some I'm hoping we can have some fun in the melee.

And finally, PolycarbonAnt has got new end blades. The old ones had a few notches taken out of them (mainly by "Here's Johnny"). Nothing serious - I could have just replaced the acetate and carried on - but I had several grams allowance to play with and fancied a change. So on with the Ti sheet. It's only 0.5mm so probably less tough than the Polycarbonate it replaced but might make some pretty sparks against the spinners. Also replaced the old ToughHubs with some of my own wheels (complete with 'flappy' tyres - looking forward to see if they make a difference).

I will be interested to see how your 'flappy' tyres work out, as I have been thinking about moulding something similar but with even longer 'flaps'.
My thinking being that the tyres will tend to run around on the tips of the flaps when at speed, but dig in like a wiper blade when needed for serious low speed pushing.
Top

In answer to Antipodean, I'd say the flappy tyres felt pretty good, though I don't think we got into enough straight-out pushing contests to say with any certainty how much difference they made. TBH it was all a bit of a blur so I will have to wait until the vids appear on YouTube.

At this stage, all I can say with any confidence about AWS60 is that: So, some minor repairs to do (largely thanks to the melees), then it's back to the drawing board. Priorities are Recycler 3a upgrades, a downdraft propeller blade for 'Try Again, Flail Again' instead of the current flat bar, plus some brand new bots. Key amongst the latter is a daft idea for a vertical flail bot inspired by the Sherman 'Crab' tanks used on D-Day and hence given the working title "Percy Hobart's Funny Ant".
Stuart (Anthony's dad)
Top

Was rather impressed by some of your bots, especially Recycler. Am looking forward to seeing that vertical flail as well.

P.S. I've already ordered a propeller for Epic Flail, this similarity thing is getting weird.
Top

I wouldn't say that try again flail again is useless. It put a pretty hefty dent in the bottom of one of my robot's (Kaizo, flipper) metal cased servos. It still works, but if that hit had been on the chassis then it probably would have done some damage.
Team Biscuit